Turkey poised to take first migrants back from Greece 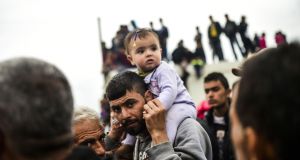 A controversial EU-Turkey deal is set to go into effect on Monday, despite opposition from rights groups who have warned that the plan is unethical and potentially illegal. Photograph: Bulent Kilic/AFP/Getty Images

Turkey says it is ready to take back up to 500 migrants from Greece on Monday, at the start of a controversial plan agreed with the European Union to tackle the continent’s migration crisis.

The EU hopes to stem migration across the Mediterranean by returning failed asylum seekers from Greece to Turkey, and it has pledged to take in one Syrian directly from a Turkish refugee camp in exchange for each Syrian expelled from Greece. Initially, the “swap” scheme will admit 72,000 Syrians to EU states.

It is still not clear exactly how many migrants will be returned to Turkey in the coming days, who will perform the operation and how it will be done, with Greece still complaining of a shortage of staff from other EU states and rights groups warning that the plan is unethical and potentially illegal.

The days leading up to the start of the “swap” scheme have also seen a sharp rise in unrest at camps for migrants around Greece, with fights and injuries reported along with several attempts to break out of lightly guarded facilities.

“We have prepared for 500 people to come on Monday. We are making our plans and putting in place our capacities,” said Turkey’s interior minister Efkan Ala, noting that Turkey was already hosting some 2.75 million refugees.

“We have been in touch with the Greek authorities and said we could take 500 people and they have given us 400 names. Tomorrow it’s possible that this figure could change,” he added.

On Turkey’s Aegean coast, two facilities to host returnees are being prepared in the towns of Cesme and Dikili, despite protests from local people.

Major human rights groups have raised serious concerns over the EU-Turkey deal, under which the bloc is due to give Ankara €6 billion, grant visa-free travel to Turkish citizens by June and accelerate the country’s bid for EU membership.

Amnesty International has accused Turkey of forcibly returning refugees to Syria in recent weeks, and says Syrians sent back from Greece could suffer the same fate; the UN refugee agency and other organisations warn that it is illegal to expel asylum seekers without reviewing each of their cases individually.

The EU is desperate for the plan to succeed, however, given the enormous strains placed on the bloc and many of its member states by the arrival to Europe last year of more than one million migrants and refugees.

More than 50,000 migrants are now stuck in Greece after Balkan states to the north, in conjunction with Austria, closed their borders to people travelling without the correct documents.

In conjunction with Turkish and Nato efforts to stop people smugglers sailing to Greece, the measures have slashed the average daily number of migrants arriving in Germany from several thousand in recent months to about 140 in March.

“It is with great caution that I say the high point of the migrant crisis is behind us,” said German interior minister Thomas de Maizière.