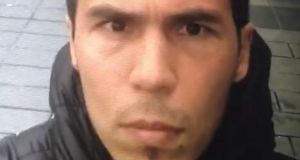 Picture released by the Turkish police of the main suspect in the Reina nightclub attack. Turkey has identified the attacker, but no further details have been released. Photograph: Dogan News Agency/AFP/Getty Images

Turkey has established the identity of the gunman who killed 39 people in an attack on an Istanbul nightclub on New Year’s Day, its foreign minister said, and further arrests were made on Wednesday, but the attacker himself remains at large.

The gunman shot dead a police officer and a civilian at the entrance to the exclusive Reina nightclub on Sunday then opened fire with an automatic rifle inside, reloading his weapon half a dozen times and shooting the wounded as they lay on the ground.

Islamic State has claimed responsibility for the attack, saying it was revenge for Turkish military involvement in Syria.

“The identity of the person carrying out the attack in Ortakoy has been determined,” Turkish foreign minister Mevlut Cavusoglu said in a televised interview with the state-run Anadolu news agency. He gave no details.

The gunman appeared to have been well versed in guerrilla warfare and may have trained in Syria, a security source and a newspaper report said on Tuesday.

The Haberturk newspaper said police investigations revealed that the gunman had entered Turkey from Syria and went to the central city of Konya in November, travelling with his wife and two children so as not to attract attention.

Police detained 27 people as part of the attack investigation in the western city of Izmir on Wednesday, including women and children, who had travelled from Konya, the Dogan news agency said.

Video footage showed some of them being brought out of an apartment building to waiting vehicles.