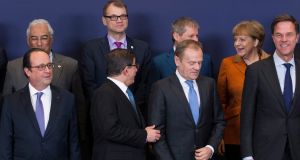 EU leaders were last night considering fresh demands from Turkey to deal with the refugee crisis, including an additional €3 billion in funds, as a key EU-Turkey summit in Brussels stretched into the night.

A draft action plan shows that EU leaders were considering doubling the money pledged to Turkey in November to €6 billion by the end of 2018. In addition, the EU would agree to ease visa requirements for Turkish citizens travelling to the Schengen free-travel area by June, having previously agreed to bring forward the date to October. But a number of countries were threatening not to sign off on the deal.

The concessions under discussion last night followed an intense day of negotiations on the refugee crisis in Brussels. While the summit had expected to be finished by early evening, Turkish prime minister Ahmet Davutoglu tabled fresh demands of the EU at lunchtime in exchange for a commitment to reduce the number of refugees arriving to the EU and to readmit illegal migrants into Turkey.

However, opposition from a number of member states including Sweden to the new demands fuelled expectations that a final decision could be pushed forward to the next EU summit in ten days’ time.

With 100,000 migrants and refugees expected to reach Greece this month and more than 30,000 asylum seekers trapped in the country, the European Union is grappling to respond to Europe’s biggest refugee crisis since the second World War.

But Turkey argues it is already taking the greatest share of the burden, having accepted more than 2.7 million refugees. It is calling for more aid in exchange for help in reducing the number of migrants leaving Turkey for the EU.

In the draft action plan being considered by EU leaders at last night’s working dinner was a commitment by Turkey to “readmit expeditiously all irregular migrants entering into the Greek islands from Turkey without prejudice to Turkey’s current commitments under the international law”.

Resettlement scheme
Turkey was also pressing for a scheme that would see the EU resettle one Syrian refugee for each “irregular migrant” readmitted by Turkey from Greece.

Among the pledges on the EU side was a commitment to “lift visa requirements for the Turkish citizens in the Schengen area” by the end of June 2016, and to transfer an additional €3 billion to Turkey by 2018 as well as cover the costs incurred in the readmission process of migrants.

Arriving in Brussels for the summit, Taoiseach Enda Kenny said that Ireland had committed €22 million to the Turkish refugee facility as part of the €3 billion package agreed in November.

He added that the Government was considering sending a Naval vessel to provide humanitarian assistance to the region.

Amid continuing concern about a clampdown on media freedom in Turkey following the takeover of Turkey’s bestselling newspaper by government authorities on Friday, Mr Kenny was one of a number of leaders who voiced concern about Turkey’s adherence to EU standards on democracy .

“If Turkey really wish to join the EU, then obviously they should be adhering to European standards,” he said.