Tsipras rejects idea of No vote leading inevitably to Grexit

Greek prime minister says he will ‘respect outcome’ of referendum

Greek PM urges the country to vote 'No' in the referendum saying he will respect a 'Yes' vote but won't be the one to carry it out, opening the prospects of new elections if voters agree to a bailout package. Video: Reuters 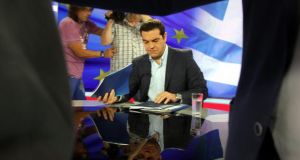 The Greek prime minister Alexis Tsipras gives an interview to Greece’s state television ERT on Monday night in Athens. Alexis Tsipras answers questions raised by foreign leaders and to clarify Greek positions, as well as the events of the past few days. Photograph: Alexandros Vlachos/EPA

Greece’s prime minister Alexis Tsipras said he will “respect the outcome” of Sunday’s referendum and act in accordance with the Greek constitution, in a strong suggestion that he will resign if the public vote Yes.

In an live interview to Greece’s public broadcaster ERT, which his government reopened last month on the first anniversary of its overnight closure by the previous government, Mr Tsipras also rejected the suggestion, made by a number of European leaders earlier in the day, that a No vote will lead inevitably to a Grexit as he said it would prove too costly for the other side.

He said a fresh mandate would strengthen his government’s hand. “Although our final proposal had been accepted, the institutions backtracked thus undermining the prospect of an agreement,” he said, accusing the institutions of not being interested in finding common ground but rather determined to impose “extreme measures”.

Mr Tsipras’s surprise decision to call a referendum just after midnight on Friday kicked off an unprecedentedly short campaign of just eight days in which Greeks will have to decide whether they back the approach taken by his government or by the country’s lenders in months of talks that ended in acrimony at the weekend.

Greek voters will be handed a ballot paper asking them to answer “Not approved/No” or “Approved/Yes” to the following question: “Should the proposal that was submitted by the European Commission, the European Central Bank and the International Monetary Fund at the Eurogroup of June 25th, 2015, which consists of two parts that together constitute their comprehensive proposal, be accepted?”

After a tense, all-day vote last Saturday in the Greek parliament, the ruling coalition, made up of Mr Tsipras’s left-wing Syriza and the nationalist Independent Greeks party, as well as MPs from the neo-Nazi Golden Dawn, endorsed the decision to call the referendum and a No vote. Politically, the Yes camp is made up by the conservative New Democracy, centrist Potami and socialist Pasok parties.

Positioning itself against both the lenders and the government, the country’s communist KKE party, which took 4.5 per cent in the last election, has appealed to voters to spoil their ballot by writing No over both boxes.

The debate between the political parties on the referendum began almost immediately on the country’s half-dozen television stations, which are offering almost dawn-to-dusk coverage of the situation.

At the same time, the public rallies that have being taking place in central Athens are likely to gain momentum as election day approaches. Claiming to be non-partisan, one version calls for for support for the government while the other backs the opposition. Yesterday evening, a pro-government rally attracted one of the largest crowds seen at a demonstration in recent months.

Yesterday, political analysts were reluctant to hazard a guess on what the outcome of Sunday’s referendum could be, with one saying it all depended on how the question was “framed” and what the effect of capital controls would be in people’s daily lives.

“It’s very difficult to tell because things are so fluid right now,” said Stathis Kalyvas, a professor of political science at Yale University. “There are two issues. One is the question of framing, whether people will understand the referendum to be about rejecting a set of proposals in the expectation that the negotiations will continue, which is what the government is pushing for, or whether this is a referendum about euro membership, which is how the opposition and also the Europeans see it.”

He said the important aspect to consider was “how people are going to react and make sense with what happens with the banks and how it affects their day-to-day lives. Most Greeks were completely unprepared for this, even those who expected it was going to happen.”

Prof Kalyvas added: “Because these things are highly variable and evolving all the time, it’s very difficult to say how things are going to pan out.” People’s current party and political identifications were quite recent and thus liable to change, he added.

Another analyst agreed that while recent polls suggest that a majority of Greeks wanted the government to seal an agreement with the lenders, even if this meant more austerity, there were a couple of factors that could come into play in the next few days.

“One is obviously that banks are closed and capital controls are in place and there is a question whether Greeks will feel their government has let them down and put them in this difficult position, or whether they will blame Greece’s lenders for putting extra pressure on them,” said Nick Malkoutzis, of political analysis website Macropolis.gr.

He did not believe interventions by foreign leaders would be a deciding factor. “For those already opposed to this government or who have become very sceptical of it in recent months, [European Commission president Jean-Claude] Juncker’s speech today will confirm their worst fears that this government was incapable of reaching an agreement with lenders.

“But those who feel that it was the lenders who were blocking a deal will see his words as an effort to deflect responsibility from the European to the Greek side. They will be angered by those efforts. The referendum will be decided very much by what happens in Greece. ”