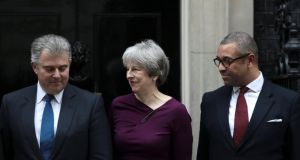 Britain’s prime minister Theresa May: accused of weakness in her failure to move or sack more ministers. Photograph: Reuters/Simon Dawson

The British prime minister Theresa May has conducted a modest cabinet reshuffle, leaving all her most senior ministers and much of the middle rank in place as some refused to budge from their posts. After a day that veered towards chaos at times, the cabinet looked little different from before, with the prime minister accused of weakness in her failure to move or sack more ministers.

The reshuffle was into its eighth hour before the prime minister claimed her first scalp, sacking Justine Greening as education secretary after she refused to move to the department of work and pensions.

The reshuffle began with the surprise announcement that James Brokenshire was stepping down as Northern Ireland secretary for health reasons. Mr Brokenshire said he will undergo major surgery in the next few weeks after doctors found a small lesion on his right lung.

There was an early moment of confusion when the Conservative party tweeted that transport secretary Chris Grayling had become party chairman, only to delete the tweet seconds later. The party chairmanship instead went to former immigration minister Brandon Lewis, with James Cleverly as his deputy.

The prime minister appointed David Lidington, the former justice secretary, as cabinet office secretary and her most senior lieutenant. He will not be first minister, as his predecessor Damian Green was, but he will deputise for Ms May at prime minister’s questions.

Communities secretary Sajid Javid saw his department rebranded Housing and Local Government, in a signal of the government’s determination to tackle the housing crisis.

Health secretary Jeremy Hunt was expected to be moved to business but after an hour with the prime minister, he emerged with his department expanded to include social care. Sources suggested that Mr Hunt argued strenuously that he should be allowed to remain in his post and to attempt to deal with the twin challenges of health and social care.

“In 2018 the impact of Tory austerity is hitting home with the public, most tragically with the most serious NHS winter crisis yet. And yet the government’s big plan for the new year is to dodge the real issues and reshuffle the pack in a pointless and lacklustre PR exercise. It’s simply not good enough. You can’t make up for nearly eight years of failure by changing the name of a department,” he said.

The prime minister faced further criticism from opposition MPs and abortion rights campaigners for appointing Maria Caulfield to a policy position in the Conservative Party. The British Pregnancy Advisory Service said it was shocked that the position was given to Ms Caulfield, who opposes abortion and spoke against a decriminalisation bill.

“We are shocked that the Conservative Party has decided to appoint as their vice chair for women an MP who supports the criminalisation of women who end their own pregnancies. Just last year, Caulfield led the parliamentary opposition to a Bill which would have decriminalised abortion up to 24 weeks of pregnancy,” the organisation said.