‘They will do everything to get us back to the drachma’

Greek crisis: Business has ‘ground to halt since capital controls were introduced’

Thousands of 'No' voters stage party in Athens and celebrate the outcome of a referendum that they say slapped down the architects of a five-year austerity drive that has ravaged the economy of the debt-ladden country. Video: Reuters 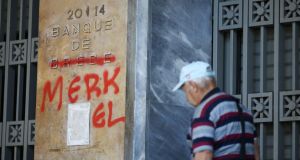 Sitting in his small, central Athens shop that sells and rents electric bicycles, Thanasis was still charged with enthusiasm at the referendum result from the Sunday night in which 61.3 per cent of voters backed their government’s stance in its negotiations with its creditors.

“This is an excellent result because this is what we expected and already knew, that the people would support the government,” said Thanasis, who sells his bicycles to Greeks and also rents to tourists.

Admitting to being among the minority of Greeks who want to go back to the drachma, Thanasis - who like many Greek interviewees declined to provide his surname - said he would happy for Greece to remain in the euro as long as Tsipras can get a better deal for the country.

“The result is good for everyone. It will help us get a better deal, not only for Greece but for Europe. A Greek exit would start a domino effect and countries like Portugal and Spain would be the next to fall. And EU couldn’t afford that,” he continued.

His business hadn’t been affected that much by the capital controls. His rentals to tourists were continuing as normal, but sales to Greeks had slipped.

“As I can’t transfer money abroad, I can’t import any more stock. But that’s not a problem. I can lively happily for two or three weeks without the banks opening. And I can easily live on €20 a day. Don’t forget that we are a tough people,” he said.

In another shop down the road, there was less enthusiasm for the view that the vote had strengthened the government’s hand.

“For five months they’ve tried and didn’t achieve much, so I’m not sure how the No vote will help. I’m hopeful that it will change things, but I still have my doubts,” said Konstaninos Primis, who sells handcarts and trolley wheels in a small shop typical of the specialised stores dotted that predominate in the narrow streets around Monastiraki in central Athens.

Business had ground to halt since capital controls were introduced in last week, he said.

“All the shops around here are dead. As they don’t know what lies ahead, the public are afraid to buy anything apart from food and other the essentials. Maybe the result will encourage them to spend more, but it’s going to take time,” he said, as he busied himself with paperwork at the back of the store.

Further up the road on Ermou Street, the main shopping mile in the centre of the city, one elderly woman and her adult daughter said their hope now was simply “that things would get better” for Greeks.

“Tsipras tried for five months to get an agreement and didn’t succeed. With this No vote, we’re sure he’ll get something better for us,” the mother explained.

With no pension and her daughter with no job, she said she is wholly dependent on her son who works as a cook in a private hospital and earns €1,000 a month.

“In Greece, we’ve learned to say No and have done it before,” her son said, referring to the rejection in 1940 by Greek dictator Gen Mextaxas of an Italian ultimatum that led to the two counties going to war.

Scathing of the Greek media’s coverage of the referendum campaign, he said TV channels that were never concerned about the long queues in front of dole offices went overboard last week in filming pensioners clamouring to gain access to the banks.

All three declined to provide their names, fearful that it could have consequences for the son’s job.

“For me it’s unacceptable that technocrats and bureaucrats we didn’t vote for are running the system. They are running the European Union, ” said Theodor Fotinopoulos, an unemployed graduate in cinematography from a French university who said he had voted for the first time.

“It’s not a win or a loss. It’s only a message - to wake up and do something. I’m 35-years-old. I feel my generation has been sacrificed. I’ve been searching for a job for a year and a half.

Reflecting the high support in Greece for remaining in the common currency, Fotinopoulos said he wanted “a democratic euro zone”.

“I think the Greeks are afraid. That’s why it’s important that they voted No. They voted No despite being afraid.

And they were still afraid, he continued.

“They will do everything to get us to back to the drachma.”

Yes voters were harder to find on the streets or were less prepared to admit to being one.

Aged 25, Yiannis was among the small minority of young people who did vote Yes, admitting that he had reservations about his choice.

“I voted Yes even though I didn’t really support the arguments put forward by the Yes camp. I voted out of fear, especially after reading in the Financial Times that there were plans to impose a 30 per cent haircut on bank deposits over €8,000.”

A sales rep by day and bartender by night, he said he had €25,000 in the bank, all of which he had worked for since he was 18, jobbing while he studied finance and business administration.

“I refused to send my savings abroad like to many others. I disagree with this. And I wasn’t going to withdraw it all and hide it in my home, either,” he said.

A former member of the youth wing of conservative New Democracy, he said he was initially supportive of Tsipras as his old party had “let him down” by not negotiating strong enough with the troika.

“Tsipras’s government now has a strong asset after the result. While I think it will , but I lead an agreement, I don’t think it will be a very good one for us.”

Polls published shortly before the election suggested that support for the No was highest among younger voters.

As the scale of the victory became apparent, many of them rushed to central Athens where thousands waved flags and chanted “No, no, no”.

“It’s a very promising and inspiring result. The people have shown that they’re not afraid of the blackmail from the EU and the ECB. Anything could happen now,” said medical student Dimitris Plageris (24), who was still relishing the result with some friends on Syntagma Square long after the party was over.

“We have sent a message of unity as a people, which shows that we won’t be divided over issues like the drachma and euro,” said Plageris, who paid €30 on a bus ticket to get from the city of Larisa where he studies to vote.

It was a small price to pay for what he now expects to happen, which is that his government will secure “a just agreement with no more austerity and a reduction of Greece’s debt burden”.

“It was a message to the people of the EU that we are brothers and we must establish democracy,” said another man sitting nearby.