‘The German people have to be ready, fearless and determined to go to war’

Countdown to War: euphoria reached Berlin on news of the German Reich mobilisation and even the liberal Berliner Tageblatt’s scepticism began to crumble 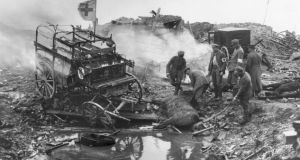 The Mobilisation
In the afternoon the Lustgarten [in front of the imperial palace] was filled with a tightly-packed crowd. Around 5.30 hours the public was informed of the mobilisation . . . to great cheers . . .

[After 7pm] the royal couple appeared on the middle balcony of the palace . . . then one heard calls of “silence” and the Kaiser, whose voice could be heard clearly over the square, spoke. He expressed thanks for the love and loyalty shown to him. If it comes to battle, parties cease to exist. We are then just German brothers . . . If our neighbours don’t grant us peace then he hopes and wishes that our good German sword will emerge victorious from battle. When he finished, rapturous cheers sounded . . .

Russia has not declared itself willing to revoke its mobilisation and respect German borders. As a result the Kaiser has, as announced in the ultimatum, ordered the mobilisation of the army and navy and the army will know to repel a Russian attack if necessary. The German people may once again say they don’t want this war which has emerged so suddenly in all its awfulness. But it will not allow the territory of the Fatherland to be flooded and devastated by Russian troops.

Yesterday was so full of tension and agitation like no other in the last decades. The Berlin population went about their work calmly but a worried expectation weighed heavily on all who didn’t mindlessly greet a great war as a colourful change of pace, people who feel the deep seriousness of such a step . . .

Days of world history lie behind us. We . . . realised with shock that the peace and balance of the European continent was founded on a volcano. The week began with the Austro-Serbian war; at its end, the mobilisation of the largest part of the European armies. The war is still limited to Austria-Hungary . . . but no one dare say what powers will be spared the welter of war. . .

We didn’t want this war; on the contrary, we did everything in our power to prevent it . . . and yet we don’t want to join the criticism of the impatient ones who regretted the restraint of the German government. Whoever views the incredible responsibility that weighs on the leading figures of the German Reich will not just understand but also support that they worked in the spirit of international peace . . .

The state of war is here, but not war itself. Even now we need patience and even more patience . . . but if all efforts fail to limit the theatre of war, the German people, in the worst case scenario, have to be ready, fearless and determined, to go to war . . . In an hour like this there can be no political, confessional or societal splits. At times like this the individual is a merely a serving part of a collective . . . Whether good or bad, sweet or sour, onward Germany in peace and, if need be, in war!