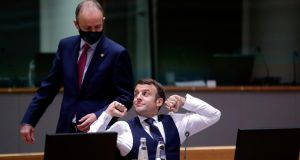 Taoiseach Micheál Martin has tested negative for Covid-19 after limiting his movements and contacts on Thursday following news that French president Emmanuel Macron tested positive for the disease.

Mr Martin and Mr Macron attended the same European Council meeting in Brussels on Thursday and Friday of last week.

The French president tested positive on Thursday while the Taoiseach confirmed his negative rest result on Thursday evening, having already testing negative for the virus on his return from Brussels last week.

Mr Martin opted to limit his contacts and movements until he had had a second test as a precautionary measure and postponed his engagements on Thursday afternoon.

Mr Martin told RTÉ Six One News during an interview that Mr Macron’s positive test and the restriction of his own movements was “a reminder of the challenges of this virus.”

He said he decided to take a second test as a precaution on hearing of Mr Macron’s infection.

“The Taoiseach took the test today out of an abundance of caution and following HSE advice,” a spokesman for the Government said.

It also emerged on Thursday that Minister for Justice Helen McEntee is restricting her movements after coming into close contact with someone showing symptoms of the virus.

“The Minister is restricting her movements due to being a close contact of someone who is going for a Covid test after displaying symptoms,” her spokesman said.

Ms McEntee recently announced that she is expecting her first baby.

Mr Macron tested positive for Covid-19 after displaying symptoms. He will isolate for the next seven days but will continue to work and carry out presidential duties remotely.

Spain’s prime minister Pedro Sanchez suspended all public activities and will quarantine until December 24th after having met the Mr Macron in Paris on Monday.

Video footage showed that both men wore masks and did not shake hands when they met at the Élysée Palace.

A European Union official said that Mr Macron was considered “a potential risk of contagion” as of last Monday.

Meanwhile, Minister for Health Stephen Donnelly described the situation with the rising number of virus cases as “precarious”.

He told the Dáil the positivity rate in testing is up, the referrals for PCR testing (which detects the presence of an antigen, rather than the presence of the body’s immune response) are up and that doctors are recording flu-like symptoms in their surgeries.

The HSE said there was no evidence of flu circulating in the community in Ireland last week.

Mr Donnelly has also published a multi-year plan to expand the number of critical care beds from 255 to 446.

The Minister said 321 beds will be created by the end of next year, compared to 255 at the start of this year.

There were fears at the start of the pandemic that critical services would be overwhelmed, but this did not happen. Under the new plan, 40 additional beds provided as part of the Covid-19 response will be retained and 26 new beds will be provided between hospitals in Dublin and Limerick next year.