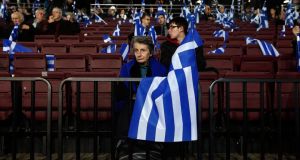 poses a grave threat to Greece’s economic prospects, its place in Europe and its national security, its incumbent prime minister told his party’s final election rally in Athens.

“The Tsipras accident will not happen. We will not allow them to take us back to the past,” a hoarse but animated Antonis Samaras told a few thousand supporters of his New Democracy party, in a last-ditch attempt to drum up support and defy opinion polls.

“Syriza isn’t going to change Europe, but instead it will turn it against Greece, ” he said, claiming that a government under the leftist party could risk propelling Greece towards a fate similar to that of Cyprus, where emergency capital restrictions were imposed after its banks were hit with liquidity problems in 2013.

Claiming he was on the verge of exiting the country from the memorandum and its dependency on bailouts, he accused Tsipras of “serving the drachma lobby”, deploying a familiar label he has sought to pin on Syriza in recent years.

In a speech in which he kept the focus on Syriza and its leader, Mr Samaras also sought to hold out some promises to voters. He said a New Democracy government would give Greeks some of the lowest tax rates in Europe by the end of its four-year term.

Departing from a long-standing convention where Greek political leaders wrap up their election campaigns with open-air rallies in central Athens, Mr Samaras opted to address his supporters in an indoor stadium, which remained largely empty half an hour after he was due to begin his speech.

As the rally eventually got under way, large numbers of supporters from the party’s youth wing gave the event the feel of a football match, as they blew air horns and enthusiastically waved Greek flags that had been placed between the seats before their arrival.

Although Mr Samaras sought to assure his audience New Democracy would still be in power on Monday, a spate of opinion polls continued to suggest that Syriza had maintained a strong lead over his party, but was likely to require a coalition partner to form a government.

In third place was the neo-Nazi Golden Dawn on 5.1 per cent, followed by socialist Pasok and newcomer To Potami on 5 per cent, the communist KKE on 4.9 per cent and the Independent Greeks on 3.5 per cent.

Observers said Mr Samaras’s campaign, which relied heavily on identifying a Syriza victory with destruction and disaster, may have backfired.

“We offered nothing in terms of hope,” he said.

He added that statements coming from some European leaders and economists that a Syriza victory did not pose the same threat as it did in 2012 served to pull the rug from under Mr Samaras’s feet.

During the campaign, Mr Samaras declined a challenge from Mr Tsipras to participate in a TV debate, preferring instead to give interviews to selected media. That allowed the Syriza leader to claim the prime minister was afraid of his almost three-year record in government.

Centred on the person of Mr Samaras, much of New Democracy’s campaign was waged via YouTube, where one video showed Greece descending into rioting and chaos under a Syriza government.