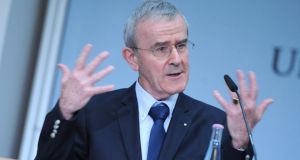 Christoph Schäublin, director of foundation of the Swiss Kunstmuseum in Bern: “Works that proven or very likely to be looted art don’t as a rule come over the threshold of the Kunstmuseum Berne.” Photograph: Britta Pedersen/EPA

The Swiss Kunstmuseum in Berne has agreed to accept works from the Gurlitt family collection not suspected of being Nazi looted art.

The bequest is being challenged by a cousin of Cornelius Gurlitt, who claims he was mentally unfit when he changed his will to benefit Berne before his death aged 81 in May. The collection includes works by Picasso, Matisse and Chagall and was assembled by Mr Gurlitt’s art dealer father, Hildebrand. The dealer claimed the 1,600 paintings and sketches were destroyed in the 1945 bombing of Dresden and their existence emerged only by chance and the find made public last year.

For decades his reclusive son, Cornelius, had hoarded the works in his squalid Munich flat and, up to his death last May, disputed the looted art claims and insisted he was the rightful owner.

In 2012, German authorities raided his home and seized the collection on suspicion Mr Gurlitt’s father had abused his position as a dealer authorised by the Nazis to dispose of modernist art they dubbed “degenerate”. Investigators suspect Hildebrand Gurlitt held on to works he had acquired at knock-down prices, often from Jewish owners fleeing Nazi Germany.

Incensed by the German investigation and accusations, Cornelius Gurlitt changed his will before his death to bequeath the collection to the Berne museum. After considering their position for six months, the Swiss museum said it would accept the collection. Works indisputably owned by the Gurlitt family may go on display in the Swiss capital as early as next year.

“Works that are proven or very likely to be looted art don’t as a rule come over the threshold of the Kunstmuseum Berne,” said Christoph Schäublin, director of the museum foundation. Given the controversy and unresolved ownership questions, he said the decision to accept Mr Gurlitt’s bequest had been “anything but easy”.

But he said he was optimistic that a Munich court would dismiss a last-minute intervention by a cousin of Mr Gurlitt to challenge Mr Gurlitt’s will.

On Friday, Uta Werner lodged an application with a Munich court charged with issuing a certificate of inheritance, without which Berne cannot accept the art. The 86-year-old commissioned a psychiatric report that suggested Mr Gurlitt was suffering from “paranoid delusions” in his final months. It is now up to a Munich judge to decide if the will is valid.

As part of the deal with Switzerland, Germany has agreed to continue its provenance investigations, assist in returning art to rightful heirs, and will assume responsibility for any subsequent legal proceedings. Germany’s looted art taskforce has established the Gurlitt family were not the legitimate owners of three paintings – Henri Matisse’s Seated Woman from 1921; Max Liebermann’s Two Riders on the Beach; and a sketch by Carl Spitzweg. All will be returned to heirs of previous owners.

German state secretary for culture Monika Grütters said she hoped the provenance research could reach a swift and unbureaucratic conclusion.

“Behind each looted art work stands the individual fate of a person,” she said. “As part of our special German responsibility to victims of the Nazi details, we want to ensure justice was done not just in the legal sense but also morally.”

The Gurlitt collection only came to light after a spot-check by customs officials on a train between Zürich and Munich in September 2010. Officials suspected Mr Gurlitt of tax evasion, but instead a raid of his apartment in February 2012 yielded one of the greatest ever finds of lost art. It was confiscated and remains in a depot.