Sutherland calls on Ireland to waive its exemption from migrant agreement 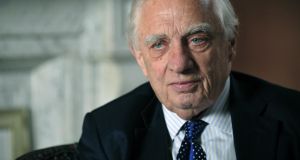 Former EU Commissioner and Attorney General Peter Sutherland has called on Ireland to waive its exemption from Thursday’s night’s European Union agreement on the relocation of 40,000 refugees. Photograph: Aidan Crawley

Former EU Commissioner and Attorney General, Peter Sutherland has called on Ireland to waive its exemption from Thursday’s night’s European Union agreement on the relocation of 40,000 refugees and accept an “allocation”. Calling the agreement “disappointing”, Mr Sutherland said: “This is a problem which can only be dealt with collectively, not in isolation to one another.

“The two figures that have been accepted...for resettlement and relocation are minimal and you would have to say that the bar was set very low but even at that low level, it was only accepted on a voluntary basis. But we will only know just how disappointing it may prove when we see the take up of the numbers which follow from it.

“Given that this is voluntary, those countries which are not part of the justice and home affairs section of the (EU) Treaties have an equal right if not to say obligation to take up the request for a fair allocation of refugees...I think this should apply right across the European Union...including the United Kingdom, Denmark and Ireland.

“I think the numbers we are talking about (40,000) are relatively small, since we have a population of over 500 million in the European Union...I would also point out that under a 1951 Convention, every European country is individually obliged when they take in refugees to keep them.”

Mr Sutherland was speaking this morning after he had had a “lively and cordial” meeting in the Vatican with Pope Francis.

He was meeting the Pope in his twin roles of UN Special Representative for International Migration and President of the ICMC, the International Catholic Migration Commission, a Catholic charity operation which provides assistance to migrants.

After his audience with the Pope, Mr Sutherland said that Pope Francis was well briefed and clearly concerned about the impact of the whole global migration problem. In particular, the Pope was concerned by the lack of solidarity shown by some richer countries towards migrants, said Mr Sutherland.

As he left the Pope in the Apostolic Library, he asked Mr Sutherland to “be sure to remember to pray for me” whilst at the same time he promised that he would offer prayers for two twin grandchildren born to the Sutherland family last night.