Sudanese man who entered Channel Tunnel has 'lost everything' and nothing 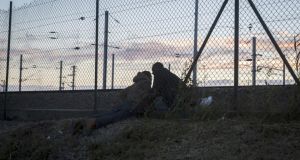 Two African migrants cross the fence as they attempt to access the Channel Tunnel in Frethun, near Calais, France. Photograph: Juan Medina/Reuters.

For one African migrant, there was nothing left to lose. Abdul Rahman Haroun risked his life this week by climbing four fences, evading around 400 security cameras and international search teams, and walking almost 50km underground in the darkness of the Channel Tunnel in an effort to reach England from near Calais, France. He dodged trains as they hurtled by at up to 160km/h.

He became on Tuesday what the authorities said was the first migrant to walk nearly the entire length of the Channel Tunnel. Officials at Eurotunnel, which operates the crossing, said Mr Haroun had been close to the other side of the tunnel, in Folkestone, England, when he was arrested.

Mr Haroun, who news reports said is Sudanese and has no fixed address, was charged this week with obstructing engines or carriages on a railway under the Malicious Damage Act of 1861. He is expected to appear at Canterbury Crown Court on August 24th.

Britain and France are grappling with a spiraling migration crisis in which thousands of desperate migrants have attempted to cross the channel in recent weeks by cutting through fences and stowing away in trucks or other vehicles.

On Friday, the United Nations called on France to draw up a “civilian emergency” plan to accommodate the thousands of people living in makeshift camps in Calais.

Romain Dufour, a spokesman for Eurotunnel, said the company was investigating how Haroun had entered the tunnel undetected, despite heightened security. “

It is illegal and very dangerous to attempt to enter the tunnel, and a person can be seriously injured or killed,” he said. “Mr Haroun could now face prison, and he will likely not be able to get asylum. He has lost everything.”

Mr Dufour said Mr Haroun had left Calais around 7.30am on Tuesday. An alert had been triggered overnight after hundreds of migrants tried to enter the Eurotunnel terminal, Mr Dufour said, but Mr Haroun was nevertheless able to make his way toward England.

With security personnel on alert, Mr Dufour said traffic was halted in a roughly 15km stretch of the tunnel, and that inspectors searched the tunnel and sealed the entrance on the French side. Police officers scoured the area for intruders, leading to two-hour delays for some passengers.

A “test” train was also sent at a slow speed to inspect the tunnel, he said. After hours of searching, British authorities said Mr Haroun was finally caught in the southern Channel Tunnel and arrested near Folkestone, around 6.15pm, nearly 10 hours after beginning his journey.

An estimated 3,000 to 5,000 migrants are housed in a migrant camp near Calais. Britain last year received an estimated 25,000 asylum applications, compared with about 175,000 in Germany, according to the United Nations.

The logjam caused by migrants trying to cross the Channel is costing the British economy as much as $390 million a day, according to some estimates. Many of the migrants in Calais come from conflict-ridden countries in the Middle East and Africa and have endured perilous journeys across the Mediterranean, often abetted by human traffickers.

The migrants say Britain is an attractive destination because they speak English, and because they believe the country offers better employment prospects than elsewhere in Europe.