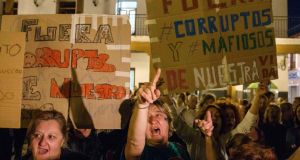 Spaniards protest against corruption after 51 people are arrested as part of an investigation involving local government contracts. Photograph: Sergio Perez/Reuters

The head of environmental issues of the Madrid suburb of Móstoles, Alejandro de Utrilla, was arrested yesterday as part of an investigation which had already seen 50 people detained since Monday. Also yesterday, three senior figures stepped down from their posts in the PP-led regional government of Madrid after being arrested and questioned by the civil guard. All three insisted they were innocent.

“Operación Púnica”, as investigators have called it, is investigating the awarding of contracts worth €250 million to companies in exchange for illegal commissions over the past two years.

“I deeply regret this situation and in the name of the Popular Party I want to apologise to all Spaniards for having appointed to posts for which they were not worthy individuals who appear to have abused those positions,” Mr Rajoy told the Senate. “Not only do I understand the totally justified anger of Spaniards, but I share their outrage and annoyance. This behaviour is particularly damaging when Spaniards have had to face so much sacrifice and make such an effort to pull the country out of economic crisis.”

Politicians, businesspeople and civil servants have been implicated, with the PP the most heavily affected political party.

It emerged yesterday that José Martínez Nicolás, the head of the Madrid region’s IT agency, was among those arrested on Monday. He is being investigated in relation to the Madrid government’s awarding of contracts to technology firm Indra.

Six mayors of towns near Madrid were arrested on Monday, five of them from the PP, the other from the Socialist Party. However, the most high-profile name among those so far held is Francisco Granados, a former secretary general of the PP in Madrid. Earlier this year, Swiss authorities reported to Spain that he had a bank account in their country, instigating the investigation, which in turn revealed a network of illegal commissions stretching to the regions of León, Murcia, and Valencia.

Both the PP and Socialists have announced that they have suspended the membership of those individuals implicated from their ranks. Meanwhile, Mr Granados’s former boss, the PP’s Madrid leader Esperanza Aguirre, gave a frank reaction to his arrest on Monday.

“I cannot, nor do I wish to, shy away from my responsibility for having appointed Mr Granados to high office within the party and in the Madrid government,” she said in a press conference. “I think everyone is fed up with the revelations of corruption that we wake up to every morning. I’m fed up with it all too.”

While the fallout from the Operación Púnica case continued, another scandal was causing the governing party further strife. Former senior PP politicians appeared before a High Court judge yesterday to face questioning over a slush fund the party had allegedly operated. Ángel Acebes, a former interior minister, denied any knowledge of the fund, which was supposedly financed by bribes from private companies and from which party members received payments.

The party’s former treasurer, Álvaro Lapuerta, was also questioned over the case, specifically over his purchase of shares of broadcaster Libertad Digital. Mr Acebes is named as a suspect for allegedly authorising the deal.