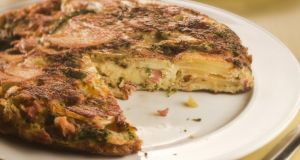 The Guinness Book of Records had rejected the Vitoria bid, due to the fact the tortilla had been put together in what it described as “portions precooked the previous day, like a puzzle”. Bill Hogan/Chicago Tribune/MCT/Getty

When the mayor of Vitoria, Javier Maroto, commissioned a platoon of chefs to cook the world’s largest Spanish omelette last year, he expected it to boost the Basque city’s international profile by entering the record books.

Nine months on from the creation of the mammoth tortilla, it is being derided as a culinary white elephant, whose record-breaking status is under question and whose financing has led to legal action being taken against the mayor.

They used 16,000 eggs, 1,600kg of potatoes and 150 litres of olive oil. Their efforts appeared to have paid off – they broke the previous record, which was set in Japan, in 1994. Mr González, a former winner of the Spanish omelette-making championship, dismissed the Japanese effort as “not even really a tortilla, barely edible”.

Unperturbed, Mr Maroto, of the conservative Popular Party (PP), insisted the event had been a success, saying, “The mere fact that we tried to break this record has been very positive for the city, gaining substantial civic support, publicity and media coverage.”

The failure drew stinging criticism from the political opposition, with Socialist Patxi Lazcoz declaring that far from being the capital of gastronomy, Vitoria had become “the capital of ridicule”.

Mr Maroto argues that Vitoria City Hall should not pay the money because the contract was to break the record, not merely attempt to break it.

The case has taken a further twist with the news that two alternative registers of records have approved the Vitoria tortilla as a world-beater. La Vanguardia newspaper reported that both the Record Holders Republic and the Official World Record have accepted it as the world’s largest.

Portugal reimposes lockdown in most of the country 21:05
Over 90m vote early as winning post looms for Trump and Biden 20:28
Covid-19: Johnson announces second lockdown for England 19:26
Greek Orthodox priest wounded in shooting at church in Lyon 18:29
Trump kicks off weekend of rallies in key state of Pennsylvania 30 Oct