Pamplona and Madrid among cities in which protesters chanted ‘It’s not abuse, it’s rape’ 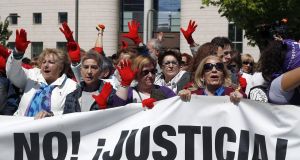 Hundreds gather at the palace of justice after the sentencing hearing of the trial of five men accused of gang raping an 18-year-old during San Fermines fiestas, in Pamplona. Photograph: Villar Lopez

The controversial decision by a court in Spain to absolve five men of charges of rape last week has unleashed a wave of demonstrations across the country and exposed the judiciary to a barrage of criticism.

On Thursday, a Pamplona court found the men not guilty of raping an 18-year-old woman during the San Fermines bull-running festival in the city in the summer of 2016. Instead, they were given nine-year jail sentences for sexual abuse.

Within hours of the verdict being announced, demonstrations against it were under way in Pamplona, Madrid and several other major cities, with those taking part chanting: “It’s not abuse, it’s rape”. The protests continued at the weekend and there have also been parallel demonstrations in other European cities, including Dublin, Paris and London.

The five-month trial drew enormous media attention as the details of the case emerged. The five defendants, who were nicknamed La Manada (or “the Wolfpack”) because of the name of a WhatsApp group they shared, met the victim in the early hours of the morning during the festival and appeared willing to accompany her to her car. Instead, they led her to the doorway of a building where they removed her clothes and had sexual relations with her, filming some of the encounter on phones.

The victim was found in a distraught state shortly afterwards and the men, all from Seville and in their 20s, were arrested.

The Pamplona court found that the victim had been “overwhelmed and unable to react” during the attack. However, it justified the decision not to deem the incident rape due to the supposed absence of violence or intimidation, one of which is required for a rape verdict under Spanish law.

One of the judges handling the case had issued a dissenting vote, declaring that the five men should have been absolved of all sexual assault charges altogether.

On Saturday, fans of Pamplona football team, Osasuna, joined the backlash against the sentence, chanting “It’s not abuse, it’s rape” during a home game against Lugo.

Many politicians have also criticised the verdict, with the leaders of all the main opposition parties attacking it. Justice minister Rafael Catalá has said the government now plans to reform the law.

But magistrates’ associations have defended the sentence and called for Mr Catalá to resign for expressing his own criticisms. Raimundo Prado, spokesman for the Francisco de Vitoria association of judges, said that “there has been a disproportionate reaction which shows a general lack of education and democratic culture which is a throwback to the lynchings of the Wild West”.