Foreign observers will be permitted to view dismantling of nuclear facilities 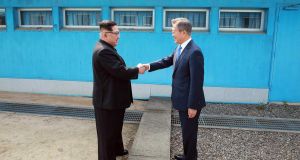 North Korea’s leader Kim Jong Un shakes hands with South Korea’s president Moon Jae-in at the military demarcation line that divides their countries ahead of their summit at the truce village of Panmunjom. Photograph: AFP Photo/KCNA Via KNS

Days after an historic summit between North and South Korea, Kim Jong-un has said he will close his country’s Punggye-ri nuclear test site next month and foreign observers will be permitted to witness the dismantling of the facilities.

Developments are moving quickly after Friday’s summit between Mr Kim and South Korean president Moon Jae-in, which resulted in a joint agreement to denuclearise the Korean peninsula and formally end the Korean War (1950-53) that concluded in an armistice but not a peace treaty.

“Although I am inherently resistant to America, people will see that I am not the kind of person who fires nukes at South Korea, the Pacific or America,” Mr Kim said, quoted by Moon Jae-in’s chief press secretary, Yoon Young-chan.

“Why would we keep nuclear weapons and live in a difficult condition if we often meet with Americans to build trust and they promise us to end the war and not to invade us?”

Mr Kim said he would not repeat the “painful history of the Korean War.”

“Concrete measures are necessary to stop any accidental military confrontation from happening,” he said.

Mr Moon has agreed to hold an early summit with US president Donald Trump and Mr Kim, and would closely co-ordinate to ensure the upcoming summit leads to an agreement on concrete measures to denuclearise North Korea, Mr Yoon said.

The key issue emerging was the need for “the complete, verifiable and irreversible denuclearisation of North Korea”, said Mr Yoon.

Mr Trump spoke on the telephone with the South Korean president for one hour and 15 minutes. He also confirmed the summit during a rally in Michigan.

“I think we will have a meeting over the next three or four weeks,” he said.

Mr Trump was full of praise for the summit for moving forward inter-Korean ties, particularly the reaffirmation of the goal of denuclearisation of the Korean Peninsula.

South Korea has emphasised the close relationship with the US, alongside which it fought in the Korean War and where 28,500 US troops are still stationed.

Mr Trump tweeted that he had a “long and very good talk” with Mr Moon and things were going very well.

The time and location for the first-ever US-North Korea with Mr Kim was still being set but they have now narrowed the possible site to two or three countries.

“The two leaders agreed that South Korea and the United States should continue to closely coordinate so that the planned US-North Korea summit could generate an agreement on concrete measures to realise complete denuclearisation,” a South Korean government official said.

The deal is the main topic of conversation in South Korea.

“It’s incredible. It’s peace. Is it really peace? Am I dreaming?” said one young woman, surnamed Kim (Kim is similar to Murphy in Ireland as a family name, no relation is implied).

“I’m happy, but I’m also scared. My grandparents live in North Korea and can you imagine how it would be to see them?” said one young businessman, whose surname is Park.

In a symbolic side note, the North Korean leader said he would align the time zones used in South and North Korea – Seoul is currently 30 minutes ahead of Pyongyang.