Franco-era officials cannot be prosecuted in Spain due to amnesty 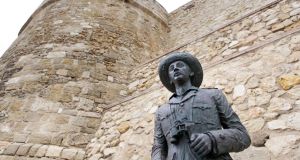 A statue of Spanish dictator Francisco Franco, in the city of Melilla. Four decades after the death of the dictator, Spain has not completely turned the page on his dictatorship. Photograph: Angela Riosangela Rios/AFP/Getty Images

Spain on Friday rejected a request by an Argentine judge to arrest and extradite 20 former Spanish officials, including two ex-government ministers, accused of human rights violations in the era of the dictator Francisco Franco.

The justice ministry cited the expiration of the statute of limitations and also said its decision was based on the principal of preferential jurisdiction in which the state may refuse to extradite if it is able to prosecute itself.

The crimes were allegedly committed in the seventies against a limitation of 15 years based on a Spanish law passed in 1973.

The justice ministry also cited the principal of dual criminality when it made the announcement following the weekly cabinet meeting.

In November, Argentine federal judge Maria Servini de Cubria issued the request while investigating allegations of torture and other crimes committed in Spain during the Franco era.

Franco ruled Spain from 1939 to his death in 1975, after which it took some years to establish a functioning democracy.

Franco-era officials cannot be prosecuted in Spain due to an amnesty enacted after the country returned to democracy.