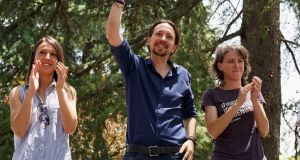 Pablo Iglesias, leader of the left-wing party Podemos, gestures towards supporters at a meeting ahead of tomorrow’s elections. Photograph: Pablo Blazquez Dominguez/Getty Images

Tomorrow, Spaniards will attempt to break an unprecedented political stalemate by voting for the second time in six months, following a polarised and often bitter election campaign.

The general election is a repeat of that held in December, which failed to produce a new government for the first time in Spain’s modern history. The governing conservative Popular Party (PP) won that vote ahead of the Socialist Party, but lost its majority as two new forces, Podemos and Ciudadanos, emerged to blow open the political landscape.

“Hopefully on Sunday we will open a new era in Spanish politics,” Pablo Bustinduy, secretary of international relations for Podemos, told The Irish Times.

Bustinduy reiterated his party’s commitment to rolling back the austerity of recent years and restructuring the economy, in order to prevent Spain being “a consumer of financial speculative bubbles and a holiday centre for northern Europeans”.

Podemos has dominated much of the campaign with surprise tactics, such as presenting its manifesto in the style of an Ikea catalogue, or expressing admiration for former Socialist Party prime minister José Luis Rodríguez Zapatero.

It has also invited the Socialist Party to form a governing coalition with it after the election.

But its economic proposals, along with promises to overhaul the country’s institutions, have drawn accusations of extremism from the PP, which has highlighted alleged links between Podemos and the leftist administration in Venezuela. Party leader Pablo Iglesias has repeatedly been forced to deny claims that his party has been funded by money from the South American country.

“All moderate Spaniards must unite our efforts and not waste a single vote, because every wasted vote is for radicals and extremists,” acting prime minister Mariano Rajoy told supporters at a campaign rally.

Rajoy is seeking re-election on the back of a fragile economic recovery and an image of predictability. Analysts therefore expect the uncertainty generated by the United Kingdom’s vote to leave the European Union to favour the prime minister tomorrow, as voters seek stability.

The Socialists and Ciudadanos, both caught in the middle, have struggled to make inroads during the campaign. However, either or both parties could be crucial in forming a government and avoiding the trauma of a third election.

Meanwhile, Ciudadanos, a more natural coalition partner for the PP, has warned it will not support a government led by Rajoy, who it sees as tainted by corruption.

Yet another scandal exploded in Rajoy’s party this week as audio recordings appeared to show his interior minister, Jorge Fernández Díaz, plotting to smear Catalan nationalist leaders in an attempt to stymie their push for independence. The minister says he himself is the victim of a plot, although the leaders of all the main opposition parties are demanding his resignation.

“To regenerate democracy, we need to have confidence in those who govern us,” said Ciudadanos leader Albert Rivera.