‘Sometimes you have to do what needs to be done, regardless of the consequences’

Corinth voted No in a big way, and people seem resigned to tough times ahead for Greece 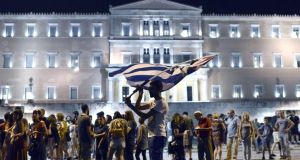 A man waves a Greek flag in front of the Greek parliament in Athens, during an anti-austerity demonstration last night. Photograph: Louisa Gouliamaki/AFP/Getty Images

As he stood in the short queue at one of the banks in Corinth to make his daily ATM withdrawal of €60, Yiorgos Tritsis seems unperturbed that his contribution to the overwhelming No vote in last Sunday’s referendum would achieve little of what Alexis Tsipras’s government had promised.

His was a symbolic act, revenge for things done rather than an endorsement of an alternative path.

“My No vote was a last stand after five years of austerity,” Tritsis said. “You don’t always do something with the intention of succeeding. Sometimes you have to do what needs to be done, regardless of the consequences.

“If I were just looking after my own interests, I’d have voted Yes. But I was considering my children’s future when I voted No. I don’t want them to end up with a monthly salary of €300.”

Asked if the new proposals from the government, amounting to tax increases and saving worth €13 billion in return for a €53 billion bailout, will improve his children’s prospects, Tritsis replies that he hopes it will end the uncertainty of the past few weeks and allow the banks to reopen.

As he waits in the queue at another ATM, Petros argues that his No vote may have been worth it as it may have contributed in getting the issue of debt restructuring on the agenda.

“The No vote was to strengthen Tsipras, to give him more authority,” he says. “The message was that we cannot accept an agreement that doesn’t deal with the unsustainable debt. Now we see that the IMF and some Germans are talking about the debt problem.”

“He came across as extreme because had no political tact. Tsakalotos should have been there from day one,” referring to the new finance minister.

Corinth is the capital of the prefecture of Corinthia, considered the weather vane of Greek politics. Since the fall of the dictatorship in 1974, with only one exception the region has always voted for the winning party.

In last Sunday’s referendum, Corinthia voted No by 61.84 percent, which almost mirrored the national average of 61.31. In the city, the No vote was even higher at 65.5 percent.

Over in the city’s social medical clinic, which provides free medical treatment to the uninsured, volunteer Dina Xydi admits that she is worried about what lies ahead because “a third memorandum is on its way and that means we’re going to have another three difficult years”.

At the same time, she remains firm in the belief that Syriza is the only force that can change Greece and pull it out of the crisis, despite the “many mistakes” it has made.

But for one Corinthian voter who went against the flow by voting Yes, the events of the week and even the past five months, when Syriza won the elections on an anti-austerity platform, simply confirm that history repeats itself and that some politicians “say one thing and do another”.

“Before he became prime minister in 1981, Pasok’s Andreas Papandreou vowed to take Greece out of the EEC and Nato, only to forget about all that when he got into power,” said Panayiotis Theodoratos, who with his son Kostas runs a traditional store selling freshly ground coffee, legumes and sweets. Turnover in the shop has been halved in the past two weeks of capital controls.

“How could people believe all that stuff they were being told, like that the debt could be made to vanish with a vote? And to see them dancing in celebration in Syntagma Square in Athens. For what?” he asks rhetorically, referring to the jubilant scenes in central Athens that followed the news that more than 61 percent of voters had backed Tsipras’s government in rejecting the lenders’ proposals.

“We’ll just have to learn to live more modestly, like we used to do,” Theodoratos continues.

He argues that the proposals to increase sales tax in restaurants (from 13 to 23 per cent) and removing special VAT exemptions on tourist islands will benefit the economy.

“The tourists won’t even notice the difference,” Theodoratos says, “so why shouldn’t the state try to increase revenue in this way?”