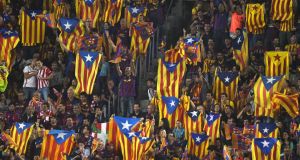 After months of relative calm, the issue of Catalonia’s bid for independence from Spain has been thrust back into the spotlight in recent days, in great part because of a soccer game.

The tensions between those in the northeastern region who want to break away from Spain and unionists in Madrid were all too apparent last Saturday, at the start of the King’s Cup soccer final in Barcelona.

With the Catalan team FC Barcelona hosting Athletic Bilbao, fans of both clubs loudly booed and whistled as the Spanish anthem was played, with King Felipe VI in attendance.

The anti-Spanish message was widely anticipated, especially as the Basque region Athletic Bilbao hails from also has a strong separatist tradition and previous finals between these two teams have seen similar incidents.

But the authorities have seen it as a provocation worthy of investigation. The secretary of state for security, Francisco Martínez, described the booing and whistling as “extremely serious” and the national sports anti-violence commission has referred the incident to the attorney general.

One of the lines of investigation will be into the Catalan nationalist organisations that signed a document titled Manifesto for the booing of the Spanish anthem and [King] Felipe of Bourbon before the game and who allegedly handed out whistles to fans as they entered the Camp Nou stadium.

“When they boo, they’re booing at themselves,” said Emiliano García-Page, of the opposition Socialist Party, which closed ranks with the conservative government on the issue. “Our common links [with Catalonia] have served us for more than 500 years and they can last another 500.”

One of the most controversial aspects of the pre-match noise was the fact that Catalan regional premier, Artur Mas, who stood next to the king during the game, appeared to smile wryly while the monarch was being jeered.

Mr Mas, who leads the Convergence and Union (CiU) coalition, is the figurehead of the Catalan independence movement and he later described the efforts to investigate the pre-match booing as “ridiculous”.

But the Catalan independence issue has also raised its head away from the soccer pitch. Mr Mas’s secession project suffered a setback in the May 24th local elections, when his nationalist coalition seemingly lost control of the Catalan capital to Barcelona en Comú, a leftist platform led by social activist Ada Colau, which has not made independence a priority.

With only a small margin of victory, Ms Colau is currently in talks with other left-leaning parties in the hope of gaining their support for her investiture as Barcelona mayor later this month.

However, on Monday, the powerful Catalan Republican Left (ERC) said its backing for Ms Colau depended heavily on her endorsement of an independence “road map” it has drawn up with Mr Mas’s CiU.

That plan includes treating a Catalan regional election this September as a plebiscite on independence, with secession to be completed as early as 2016.

Pro-independence Catalans complain that their relatively wealthy region is subsidising the rest of Spain and not receiving enough investment back from the central government. They also accuse the Spanish state of failing to understand their culture and repressing their language.

Ms Colau, who focused her election campaign on social issues such as public housing and inequality, has been ambivalent so far on Catalan independence. She did, however, vote last November in an unofficial referendum on the issue, which asked Catalans two questions: if they wanted their region to be a state; and if that state should be independent.

“I’ve never been pro-independence, but I voted ‘yes-yes’ [in November] because I’m convinced that the state model has been exhausted and that we have to rethink the relationship,” she said ahead of last month’s elections. “But it has to be a real sovereignty and that will never come on CiU’s watch.”

Ms Colau’s stance echoes the political tensions among pro-independence parties – particularly ERC and CiU – as they have attempted to overcome their disagreement on social and economic issues in order to work together on the creation of an independent nation.

Oriol Junqueras, the ERC leader who called for Ms Colau to support the independence scheme if she wants his party’s support in Barcelona city hall, admitted on Monday that he has booed the Spanish national anthem in the past. However, he suggested the independence plan would bring an end to such behaviour.

“When Catalonia is independent, nobody will boo the anthem,” he said.