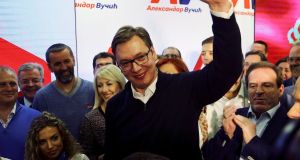 Serbia’s prime minister Aleksandar Vucic celebrates his win in the presidential election at his headquarters in Belgrade. Photograph: Antonio Bronic/Reuters

The European Union and Russia have congratulated Serbian prime minister Aleksandar Vucic on his landslide presidential election victory and expressed high hopes for future co-operation at a time of rising geopolitical rivalry in the Balkans.

With 92 per cent of votes counted from Sunday’s ballot, Mr Vucic had 55 per cent, former civil rights ombudsman Sasa Jankovic was on 16 per cent and Luka Maksimovic – a comedy candidate who parodies Serbia’s populist politicians – was third with nine per cent.

The scale of Mr Vucic’s victory gives him a degree of power unseen in Serbia since the rule of Slobodan Milosevic, the ultra-nationalist leader whose policies were largely responsible for the Balkan wars of the 1990s – fuelling fears among critics that the former Yugoslav republic could slip back towards authoritarianism.

“A huge majority in Serbia is in favour of continuing the [reform] process, the European path, and also wants to maintain our traditional friendships with Russia and China. When you have results like this, there is no instability – Serbia is strong and it will be even stronger,” he added.

In a joint letter, top EU officials Donald Tusk and Jean-Claude Juncker said Mr Vucic’s crushing victory “showed that the people of Serbia fully endorse the European path you have chosen and which will lead to EU membership”.

They also noted that “stable and functioning institutions, the rule of law and the fight against corruption are crucial for further positive economic developments” – pointed comments amid accusations that Mr Vucic is ignoring abuse of power and graft among his allies and weakening democratic checks and balances in Serbia.

In the run-up to the election, Mr Vucic visited the leaders of Germany and Russia, emphasising his role as an important regional leader and underlining his determination to preserve ties with Moscow despite current East-West tension.

Serbia is now awaiting delivery of Russian fighter jets and tanks, in a deal that has unnerved its neighbours and stoked concern over how Moscow will seek to maintain a foothold in the Balkans as its countries pursue membership of the EU; several also want to join Nato, but Mr Vucic has ruled that out for Serbia.

“Such a convincing election victory speaks of broad support for your efforts to resolve current economic and social challenges facing Serbia, and for the pursuit of a constructive, balanced foreign policy course,” Russian president Vladimir Putin said in a congratulatory message to Mr Vucic.

The Kremlin said Mr Putin hailed Mr Vucic as a “principled supporter of stronger friendly relations between Russia and Serbia” who would develop the “strategic partnership for the good of the brotherly peoples of both countries”.

Mr Jankovic, the former civil rights ombudsman who came a distant second in the election with 16 per cent of votes, now appears to be the de facto leader of Serbia’s liberal opposition.

In third place was Mr Maksimovic, a comedy candidate who parodied the crass publicity stunts and empty, outlandish promises of Serbia’s populist politicians.

1 One hundred Irish retailers for all your online Christmas shopping
2 Covid-19: Pressure over breakdown in tracing system intensifies as State enters Level 5
3 Miriam Lord: All test and no trace makes Jack, and heaven knows who else, a very ill boy
4 Gym owner plans to defy restrictions and open
5 Des Bishop apologises to Traveller community for comments in interview
Real news has value SUBSCRIBE