Peter Oborne claims distinction between advertising and editorial has ‘collapsed’ 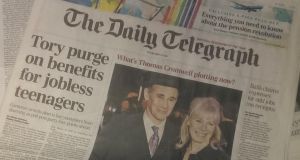 Peter Oborne, the Daily Telegraph’s chief political commentator, has resigned from the paper, accusing it of a “fraud on its readers” over its coverage of HSBC.

Peter Oborne, the Daily Telegraph’s chief political commentator, has resigned from the paper, accusing it of a “fraud on its readers” over its coverage of HSBC.

In a blistering attack on the paper’s management and owners, Sir David and Sir Frederick Barclay, Oborne claimed the paper deliberately suppressed stories about the banking group in order to keep its valuable advertising account.

He said it was a “most sinister development” at the paper, where he claimed the traditional distinction between the advertising and editorial department had “collapsed”.

Oborne said he had told Murdoch MacLennan, chief executive of the paper’s parent company the Telegraph Media Group, that he was resigning last December.

He said he had intended to leave quietly but had a “duty to make all this public” following the Telegraph’s coverage of last week’s revelations about HSBC’s Swiss banking arm, which helped wealthy customers dodge taxes and conceal millions of dollars of assets, doling out bundles of untraceable cash and advising clients on how to circumvent domestic tax authorities.

Oborne said readers “needed a microscope to find” the paper’s reporting of the HSBC scandal, which received many pages of coverage in other UK national titles including the Guardian, Financial Times, Daily Mail and Times.

“The Telegraph’s recent coverage of HSBC amounts to a form of fraud on its readers,” he said.

“It has been placing what it perceives to be the interests of a major international bank above its duty to bring the news to Telegraph readers. There is only one word to describe this situation: terrible.”

Oborne claimed it was a pattern that could be seen elsewhere in the paper’s reporting, including its coverage of last year’s protests in Hong Kong.

“The coverage of HSBC in Britain’s Daily Telegraph is a fraud on its readers,” Oborne said in an article on the Open Democracy website published on Tuesday.

“If major newspapers allow corporations to influence their content for fear of losing advertising revenue, democracy itself is in peril.”

Oborne alleged that the paper had discouraged critical stories of HSBC since the start of 2013 when the bank suspended its advertising with the paper following a Telegraph investigation into its operation in Jersey.

He said one former Telegraph executive told him HSBC was “the advertiser you literally cannot afford to offend”.

“We aim to provide all our commercial partners with a range of advertising solutions, but the distinction between advertising and our award-winning editorial operation has always been fundamental to our business. We utterly refute any allegation to the contrary.

"It is a matter of huge regret that Peter Oborne, for nearly five years a contributor to the Telegraph, should have launched such an astonishing and unfounded attack, full of inaccuracy and innuendo, on his own paper.”

Before publication in the Guardian, and many other outlets including the BBC, of the HSBC revelations, and while negotiations were continuing over the material, the bank put its advertising with the Guardian’s parent company, Guardian News & Media, “on pause”.