Search for two suspects continues after raid in Belgium 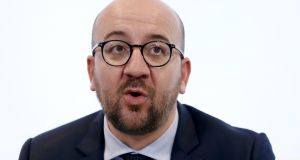 A search for two men who escaped during an anti-terrorism raid in Brussels continued yesterday as authorities named the suspect killed by police during the operation.

Algerian national Mohamed Belkaid was shot dead by police on Tuesday as he prepared to fire from a window of an apartment on Rue du Driers in the district of Forest of the city.

The raid was linked to the November 13th terrorist attacks in Paris that left 130 people dead, officials said.

The 35-year-old had been living in Belgium illegally, police revealed, and had been known to authorities as a petty criminal, but not for any links to Islamic terrorism.

An Islamic State flag, a book on the religious-political ideology of Salafism, a Kalashnikov weapon and ammunition were found beside the body in the apartment, Eric Van der Sypt of the federal prosecutor office said.

A Kalashnikov rifle was also recovered during a raid of an apartment in nearby Rue de l’Eau.

Despite the heightened terror alert, Belgium has maintained its security status at level three. Announcing the decision following a meeting of the national security council, Belgian prime minister Charles Michel said that this security level signified a “possible and real threat”.

“Our intention is to stay fully mobilised,” he told reporters in Brussels following the meeting. “I want to insist on the fact that level three is not an ordinary level. We have already been presented with the fact, over the past few months, that level three could continue for a certain time, and the events of yesterday have demonstrated to us the reasons why this level was established.”

Tuesday’s raid was undertaken jointly by French and Belgian police forces. At least three of the suspects involved in the Paris attacks lived in Belgium, including the planner of the attack, Abdelhamid Abaaoud, who was killed by French police in a shoot-out in the northern Paris suburb of Saint-Denis in the days following the terrorist atrocities.

“We have information about one person that suggests that he could undertake violent actions in France,” French interior minister Bernard Cazeneuve said, adding the man was thought to have ties with Islamic State in Syria.

“This person was arrested this morning along with people linked with him,” Mr Cazeneuve said.

However, he warned against jumping to the conclusion that an attack was imminent as checks were underway.