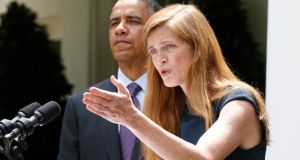 Samantha Power speaking in the Rose Garden of the White House after President Barack Obama made his announcement about her appointment. Photograph: Jason Reed/Reuters

With the appointment of the Irish-born foreign policy expert and author Samantha Power as US ambassador to the United Nations, Ireland has gained another friend at the highest echelons of the Obama administration.

US vice president Joe Biden, White House chief of staff Denis McDonough, CIA director John Brennan and Power have all been guests at the Irish ambassador’s residence in Washington.

“All of these people are very, very proud of their Irish connections,” said Irish Ambassador Michael Collins. “They’re Irish in their DNA, and we are enormously proud of their success. Does that solve all our problems at any one time? Of course not. But it gives us points of access and a potentially sympathetic ear, should we ever need it.”

Collins stressed that “when Samantha Power goes to the UN, of course she is representing American interests”. But, he adds, “She will be somebody to whom we can relate very easily and very warmly.”

Power emigrated from Dublin to the US with her mother, Veronica Delaney, and stepfather, Edmund Bourke, at the age of nine. In subsequent decades, her long red hair strengthened her identification with Ireland in the minds of Americans. When the New York Times interviewed him in 2003 about Power’s Pulitzer Prize-winning book, A Problem From Hell; America and the Age of Genocide, the late Richard Holbrooke, a former UN ambassador and Power’s mentor, compared her to Maud Gonne.


Moral obligation
In A Problem From Hell, Power argued that the US had repeatedly failed to meet its moral obligation to prevent genocide. Then senator Barack Obama read the book and sought Power out at Harvard, where she was a professor, in 2005. “I was supposed to meet him for an hour,” Power later recalled. “And entering the fourth hour, I heard myself say, ‘Why don’t I leave my job at Harvard and intern in your office?’”

As senior director for multilateral affairs and human rights on the national security council, Power was credited, along with then secretary of state Hillary Clinton and Power’s predecessor at the UN, Susan Rice – this week promoted to national security adviser – with persuading a reluctant Obama to intervene in Libya in 2011.

In an unusual role reversal, the military brass opposed the use of force, while diplomats clamoured for it. The trio were labelled “amazons”, “lady hawks” and “valkyries”.

A careless comment about Clinton, to a Scottish journalist during the 2008 presidential campaign, had scuppered Power’s chances of a high-profile job during Obama’s first term. In what she thought was an off-the-record remark, Power, then a foreign policy adviser to Obama, called Clinton, his rival for the democratic nomination, a “monster”. Power apologised profusely and resigned. Holbrooke, who was close to both women, later reconciled them.

Power possesses an unusual blend of intensity, idealism, professional devotion and glamour. She has posed in a teal evening gown and high heels for Men’s Vogue, and played basketball with George Clooney. She met her husband, the constitutional lawyer Cass Sunstein, on the 2008 Obama campaign. A photograph of them in tennis whites on the squash court was captioned “The Fun Couple of the 21st Century” by Esquire magazine.


Hearings
The Israeli newspaper Haaretz predicts that remarks by Power in 2002 about Israel and the Palestinians could complicate her confirmation hearings.

Power said “alienating a domestic constituency of tremendous political and financial import” might be necessary to achieve human rights for Palestinians. She suggested it might require “billions of dollars, not in servicing Israel’s military but actually investing in the new state of Palestine”, and added that the US might have to send “a mammoth protection force”.

The blogger who circulated the clip on YouTube this week attached the headline “Obama Advisor Samantha Power Calls for Invasion of Israel.”

During the 2008 campaign, Power was criticised by conservatives for advocating dialogue with Iran. At the UN, her idealism could be tested by Obama administration policies on Iran, Israel-Palestine and especially Syria.