Rutte gets firm with Turkey days before election 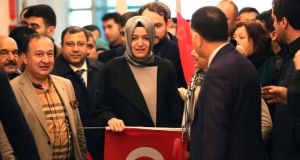 Turkish family minister Fatma Betul Sayan Kaya at Ataturk airport. She was expelled from the Netherlands at the weekend. Photograph: Sedat Suna/EPA 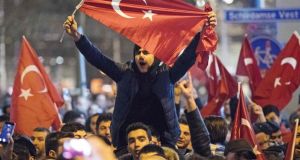 Protesters demonstrate near the Turkish consulate in Rotterdam on Sunday after the Turkish family minister was removed from the country. Photograph: Marten van Dijl//AFP/Getty Images

Just days after far-right leader Geert Wilders accused him of being “too weak” to stop a pro-Erdogan rally, Dutch premier Mark Rutte responded by preventing one Turkish minister from landing in the country, expelling a second and using riot police to put down protests in Rotterdam.

The tough action by Mr Rutte – who retains a slim lead in the polls ahead of Wednesday’s election – led to a furious response from Turkish president Recep Tayyip Erdogan who denounced the Dutch government as “Nazi remnants and fascists” and pledged to respond with “harsh” sanctions.

Despite eight phone conversations between Mr Rutte and his Turkish counterpart, Benali Yildirim, relations finally broke down on Sunday when an exasperated Mr Rutte commented: “The Turkish government keeps talking about Turkish citizens in the Netherlands . . . These are Dutch citizens.”

Mr Erdogan responded in kind at a ceremony in Istanbul on Sunday, publicly linking the Dutch action with the election for the first time, and warning: “Netherlands, if you are sacrificing Turkish-Dutch relations for the sake of the election on Wednesday, you will pay a high price.”

It’s understood the Dutch ambassador to Ankara, who is currently out of the country, has been told by the Turkish foreign affairs ministry not to return and that Dutch diplomatic posts will be closed – an unprecedented deterioration in relations between fellow Nato members.

Turkish foreign minister Mevlut Cavusoglu, who was prevented from speaking in Germany last week, had been due to address a rally in Rotterdam advocating a yes vote for wider powers for Mr Erdogan in a Turkish referendum next month, but his jet was prohibited from landing on Saturday.

At the same time, Turkey’s family minister, Betul Sayan Kaya, who arrived in the Netherlands from Germany, was detained by police, returned to the German border and expelled from the country.

After several hundred angry pro-Erdogan supporters gathered outside the Turkish consulate in Rotterdam on Saturday evening and bottles and stones were thrown in protest, the authorities responded by using riot police with dogs, officers on horseback wielding batons, and water cannon.

Mr Wilders, leader of the Freedom Party whose anti-immigration policies have been at the heart of this election campaign, waded in with this tweet: “To all Turks in the Netherlands who agree with Erdogan: Go to Turkey and NEVER come back.”

Ethnic Turks account for some 2.3 per cent of the population and typically vote for parties of the left, such as Labour, D66 and a new anti-discrimination party, Denk (Think), so Mr Rutte’s tough action is likely to gain him some votes on the right rather than lose any on the left.

He may also be hoping there’s a possibility, with just two days to go, of attracting some votes from undecideds who have been inclined to support Mr Wilders but are worried he could drag the country too far to the right and damage the prospects for a recovering economy.

Wednesday’s election is regarded as a bellwether for European populism and will be watched not just to see whether the Netherlands embraces or rejects a swing to the right but for some indication of what’s likely to happen later this year in France and Germany.

“What’s fascinating is that this election will test the health of Euroscepticism in a core member of the EU,” says Adriano Bosoni, senior Europe strategist at analysts, Stratfor. “That should give us some indication of what way the wind is blowing.”

For some months now that the wind has undoubtedly been blowing in favour of the Freedom Party, whose one-page election manifesto, apart from withdrawal from the EU, includes an end to immigration, the closure of mosques and the banning of the Koran.

At one point, Mr Wilders was polling as high as 35 seats in the 150-seat parliament, with Mr Rutte trailing in the low 20s – a clear sign, said the Freedom Party leader, that a rebirth of somnolent Dutch nationalism in the form of a “Patriotic Spring” was just around the corner.

A win of that magnitude for Mr Wilders would be regarded by the markets as “a preview of what could happen in the French election”, says Art Hogan of Wunderlich Securities, especially in the context of Marine Le Pen’s warning last week that “the euro isn’t ailing, it’s dead”.

After that, GreenLeft are performing well on 15 to 17 seats, with the junior coalition partners, Labour – still being punished for their role in Mr Rutte’s austerity cabinet – on 11 to 13 seats or 7 per cent of the vote.

Mr Rutte and Mr Wilders are still scheduled to meet for an eagerly-awaited two-man TV debate on Monday evening, with all the party leaders due to meet on radio on Tuesday evening.

Official who quashed 2011 protests is named Hong Kong national security chief 15:50
List of countries where English can travel without quarantine on return is published 15:49
Russia’s constitutional changes to come into force on July 4th 14:04
Édouard Philippe resigns as prime minister of France 11:28
Texas governor orders wearing of masks in sharp reversal of policy 10:10