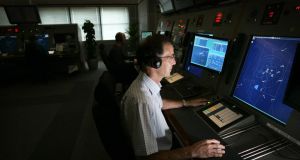 The Irish Aviation Authority said the Russian planes were monitored off the west-south/east coast from about 3.00pm to 7.00pm. Photograph: Dara Mac Dónaill

The planes were monitored off the west-south/east coast from about 3.00pm to 7.00pm. The IAA was not informed in advance.

In a statement, the authority said the aircraft operated within 25 nautical miles of the Irish coast in North Atlantic airspace and in airspace under the control of the IAA.

“The flight posed no safety threat to civil aviation on this occasion,” the IAA said.

The activity propmted the RAF to scrambleTyphoon fighters to escort the Russian Bear aircraft off the coast of Cornwall as a diplomatic row broke out after British foreign secretary Michael Fallon issued a warning over Moscow’s threat to Nato’s Baltic states.

After a similar incident last month, the Irish Government said the use of Irish-controlled airspace by two Russian bombers was unacceptable.

A joint statement released on January 30th by the Department of Foreign Affairs and the Department of Defence said the planes’ sortie off the west coast, which also prompted an emergency response from the RAF, did not encroach into sovereign Irish airspace.

It did, however, demonstrate a lack of communication on the Russians’ behalf, according to the Government. “Although there was no risk [of collision with civil aircraft] on this occasion, such non-notified and non-controlled flight activity is not acceptable.”

After this week’s incident the British foreign secretary Mr Fallon warned that Russian president Vladimir Putin could repeat the tactics used to destabilise Ukraine in Baltic members of the Nato alliance, saying that Nato must be ready for Russian aggression in “whatever form it takes”.

A British ministry of defence spokeswoman said : “RAF quick reaction alert Typhoon fighter aircraft were launched [WEDNESDAY]after Russian aircraft were identified flying close to UK air space. The Russian planes were escorted by the RAF until they were out of the UK area of interest. At no time did the Russian military aircraft cross into UK sovereign air space.”

Prime minister David Cameron said that Moscow appeared to be trying to make “some sort of a point” with the latest incursion by Russian warplanes.