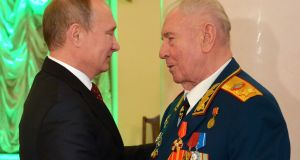 Russia has denounced the decision of a Lithuanian court to convict 67 former Soviet officials of offences including war crimes for their role in a deadly military crackdown on pro-independence protesters in the Baltic state in 1991.

The Soviet Union’s last defence minister, Dmitry Yazov (94), was sentenced in absentia to 10 years in jail for war crimes, and 66 other former military and KGB officials received sentences of between four and 14 years.

Russia refused to extradite the suspects and only two defendants were in court on Wednesday for the end of a three-year trial into the events of January 1991, when Soviet paratroopers stormed television headquarters in the Lithuanian capital, Vilnius, killing 14 people and injuring some 700 others.

Russian foreign ministry spokeswoman Maria Zakharova accused Lithuania on Thursday of flouting legal norms and abusing the rights of the accused, while Russia’s powerful investigative committee said it might seek to prosecute the Lithuanian judges involved for “delivering an obviously unjust sentence”.

“Attempts by the [Vilnius] authorities to falsify obvious facts with the help of judicial manipulations, only reflect the destructive course of Lithuania’s current leadership towards Russia,” Ms Zakharova said.

Moscow’s foreign ministry said in a statement: “We characterise these actions as extremely unfriendly and fundamentally provocative, and they show the bias and political motivation of this shameful judgment.”

Russian deputies also condemned the trial, during which Mikhail Gorbachev, the Soviet president at the time of the killings, refused a Lithuanian request to testify.

Later in 1991, Soviet hardliner Yazov was arrested after taking part in a failed coup against Gorbachev, but he was pardoned and released in 1994 without standing trial.

On Yazov’s 90th birthday, Russian president Vladimir Putin awarded him a major state honour “for his contribution to strengthening the nation’s defence capability and promoting patriotic values among the younger generation”.

The court verdicts were welcomed in Lithuania, which in March 1990 was the first of the 15 Soviet republics to declare independence.

“On this historic day, justice has come. Those responsible for the death of peaceful freedom defenders have been sentenced,” said Lithuanian president Dalia Grybauskaite.

She has been one of the EU’s most outspoken critics of Russian military aggression against Georgia and Ukraine, and strongly backed Nato’s 2016 decision to strengthen security in the Baltic region by deploying multinational battalions to Lithuania, Latvia, Estonia and Poland.

“It can be stated that Lithuania has never been so safe and secure as it is now,” she said on Thursday, as her nation marked 15 years since its accession to Nato.

“Nato membership enables us to live in peace and to build our state the way we want it to be built,” and to ensure “the occupation, deportation and persecution of our people will never happen again,” she added.