Russia says it has vaccinated over one million people 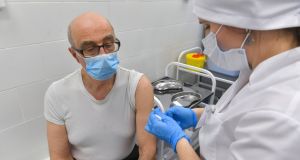 Russia has vaccinated more than one million people against Covid-19, the head of the country’s main vaccine developer said, as the country recorded its lowest infection rate for more than six months.

Russia has the world’s fourth highest number of coronavirus infections, but has pursued a fully domestic, state-backed and state-financed vaccine programme aimed at a fast rollout of jabs that the Kremlin hopes will stem the spread of Covid-19 and avoid the need for more economically-crippling lockdowns.

Alexander Gintsburg, whose Gamaleya Institute developed the Sputnik V vaccine, said on Tuesday that more than a million people had already been vaccinated. About 100,000 vaccines were being administered each day, he told state news agency Ria Novosti.

Russia’s decision to approve Sputnik V for civilian use in August before it had passed standard safety and efficacy tests drew criticism from many western medical officials, but underlined the Kremlin’s eagerness to suppress the pandemic through vaccination rather than the additional quarantine measures adopted by other countries.

The country’s government said it had recorded 24,246 new cases of the virus on Tuesday, roughly 20 per cent lower than in late December. That represents an infection rate of 0.91, the lowest since late June.

National polling shows many Russians remain suspicious of the jab, and questions remain over what proportion of the country will ultimately choose to have it, and how effective Moscow will be in supplying vaccines to regional administrations outside of the major cities.

But reaching the milestone of one million vaccines appears to vindicate the Kremlin’s decision to rush through a domestically-developed jab rather than compete with other countries for deliveries from multinational pharmaceutical groups.

The UK, Germany and a number of other EU countries have encountered problems with both acquiring sufficient vaccines and administering them.

Gamaleya has said that the Sputnik V jab has an efficacy rate of 91.4 per cent, based on the final results of its Phase 3 trials. These results have yet to be published in a peer-reviewed medical journal.

President Vladimir Putin, who says he plans to be vaccinated but has not yet had the jab, on Monday instructed the government to assess whether Russia should only permit cross-border travel for people with vaccination certificates. – Copyright The Financial Times Limited 2021