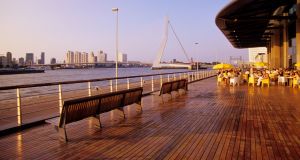 Rotterdam has become the first city in Europe to launch a mobile app that allows victims of sexual harassment to report the incidents instantly. Photograph: Mel Stuart/Getty Images/Westend61

Rotterdam has become the first city in Europe to launch a mobile app that allows victims of sexual harassment to report the incidents instantly and anonymously.

The app is meant primarily for cases where the immediate involvement of the police is not regarded as necessary by the person reporting the harassment, though it can link to the emergency number, 112, if the confrontation escalates, according to the city council.

“Eighty-four percent of women experience sexual harassment at some point,” said city alderman Joost Eerdmans, “and by harassment I don’t mean staring or cat-calling, but serious intimidation that makes them feel so uncomfortable that they avoid certain locations. That has to stop.”

The app allows those making the complaints to give their locations, the nature of the harassment, and any additional information they feel appropriate, while remaining totally anonymous – so that there’s no possibility that their report will rebound and make their circumstances worse.

The information will allow the city council to draw up a map which tells them where women are having problems, whether there are problems in some of those same locations repeatedly, and whether a number of different women are being targeted in similar ways.

“The aim is that once we have a picture of the trouble spots, undercover officers will be able to patrol those areas and catch the perpetrators in the act,” said Eerdmans.

And although it’s not aimed primarily at work situations, there is nothing to stop someone being sexually harassed at work in Rotterdam from using the app to report the behaviour.

In the wake of the Harvey Weinstein scandal, a group of Silicon Valley executives said last month that they were planning an app that would allow victims of sexual harassment or discrimination in the workplace to report the incidents anonymously to their chief executives and boards of directors.

Similarly, public transport companies in a number of cities – such as Toronto Transit Commission, for example – have developed apps which allow passengers to report sexual or other harassment on their networks.

However, Rotterdam, it seems, is the first city to make a sexual harassment app available to all its residents and visitors.

It ties in with plans by the city to follow Amsterdam from January 1st next in widening the definition of intimidation to include shouting at someone in the street, falling into step and walking alongside them, or suggesting sex – behaviour that was difficult to prevent before, but which could now attract fines of up to €4,100 and three months in jail.

From April 1st, Rotterdam will also introduce a team of wardens who will be available to respond immediately to reports of sexual harassment or intimidation.