Romania goes to polls in shadow of corruption and fatal fire 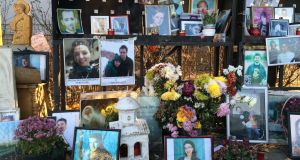 Tributes to the 64 people who died in October 2015 when a fire ripped through the Colectiv nightclub in Bucharest, Romania. It was housed inside an old shoe factory called Pionerul. Photograph: Daniel McLaughlin

The photographs and flowers are fading now at a makeshift shrine to 64 people who died when fire engulfed Bucharest’s Colectiv nightclub in October 2015.

Facing the old Pionierul factory that housed the club, however, Romanians recently unveiled a statue to the victims and hung a banner that reads: “A year has passed and no one has been found guilty. Brothers, we haven’t forgotten you.”

The fire prompted mass protests in Bucharest as public grief became fury, over the corruption that allegedly compromised safety standards at Colectiv and potentially the medical care given to those injured by the flames and toxic fumes.

Several people are being prosecuted over the tragedy, but the main political casualty was a Romanian government led by the Social Democrats (PSD), which resigned a few days after the blaze.

A temporary cabinet of technocrats has run Romania since then, and the country of 20 million people will vote to elect a new parliament on Sunday – with the PSD poised to win despite continuing anger over Colectiv and endemic corruption.

“I went to Colectiv a few times. It was a cool place. But thank God I wasn’t there that night,” said Radu, a computer engineering student in Bucharest.

“Bucharest – all of Romania – is full of places that pay bribes for their licences and to get around safety rules. People say it’s hard to do business here without paying someone off. I don’t know who is worse, the businessmen or the officials.”

Radu said he favoured a new party called the Save Romania Union (USR), a diverse group of activists, academics and people from business and the arts, which grew out of a Save Bucharest movement to protect the city’s historic buildings. “But it looks like PSD will win again,” he shrugged.

“People in Bucharest and other cities know the USR, but the villages always vote PSD.”

The PSD has run Romania for most of its 27-year post-communist history, and grew out of the ruling party led by dictator Nicolae Ceausescu, who was executed alongside wife Elena during the 1989 revolution.

The DNA has indicted two former PSD prime ministers for corruption – Adrian Nastase was twice jailed and Victor Ponta, who resigned last year, faces trial - and several of its former ministers and party backers have also been convicted.

Andrei Tarnea, executive director of the Aspen Institute think tank in Bucharest, said the Colectiv protests “were not actually reflective of how the general public in the whole country was feeling. The protests were very city-centred.”

“The Socialists capitalised on the fact that they did keep their promises when they last came to power [in 2012]. They rolled back the austerity that had a devastating effect on quality of life . . . The poorest of the poor paid the highest price in Romania.”

The PSD is now pledging to boost state wages, pensions and other benefits, and offset that spending by cutting bureaucracy and the budgets of several ministries.

Polls suggest the PSD will take about 40 per cent of votes, ahead of its main centre-right rival the National Liberal Party with 27 per cent.

With no party forecast to win an outright majority, coalition talks may give the role of kingmaker to the fledgling USR.

1 Bickering wears down patience as government talks crawl forwards
2 George Floyd death: Clashes and curfews in many cities as protests sweep US
3 Over 300 church groups unite for online Irish Blessing video
4 Coronavirus: Global cases pass 6 million as death toll reaches more than 369,000
5 ‘I have no faith in the Catholic Church but I prayed when I’d Covid-19’
Real news has value SUBSCRIBE