Renzi remarks about Varoufakis and Corbyn lead to bitter exchanges 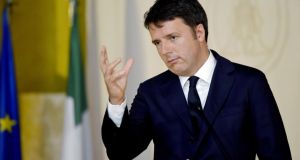 The occasion was a crucial Democratic Party (PD) meeting at which Mr Renzi was attempting to contain the ire of party dissidents, concerned that his forthcoming senate reform Bill is both undemocratic and unconstitutional.

As he tried to rein in the dissident minority on the eve of a vital senate vote on the Bill next week, Mr Renzi urged against a party schism.

He who lives by the sword (of schism), dies by schism, he allegedly told the party in an apparent reference to the failure of the Popular Unity party, made up of dissidents from the Syriza party of Greek prime minister Alexis Tsipras, to win any seats in last Sunday’s snap Greek general election.

A clearly less-than-pleased Mr Varoufakis replied yesterday afternoon on both Twitter and in a blog, referring to the July 12th all-night EU summit which left Greece with little choice but to accept more austerity measures or do a “Grexit”.

“Mr Renzi, I have a message for you,” Mr Varoufakis wrote. “You can be as pleased as you like that I am no longer either finance minister nor a parliamentarian. But you haven’t got rid of me . . . What you got rid of on the night that you took part in a disgusting coup against Greece and Alexis . . . was European Democracy itself and your own standing as a European democrat.”

At the same meeting and in the same vein, Mr Renzi was also reportedly disparaging about new Labour leader Jeremy Corbyn, saying that the person most pleased by his victory is Conservative prime minister David Cameron:

“It’s not a question of being pro-Blair or anti-Blair,” Mr Renzi said. “It’s like the Olympics, do you want to go to elections to participate or to win?”