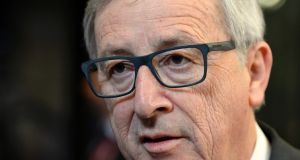 European Commission president Jean-Claude Juncker: the commission has pledged to advance an EU-Turkey readmission agreement, which will address the crucial question of whether Turkey is considered a “safe country” by the EU. Photograph: Thierry Charlier/AFP/Getty Images

The provisional deal agreed late on Monday between the European Union and Turkey represents for many the last chance for Europe to deal with its biggest refugee crisis since the second World War.

Beset by internal divisions and a lack of strategic vision, the EU has allowed the crisis to spiral out of control. The UN is warning of a humanitarian catastrophe in Greece, where more than 30,000 migrants are trapped as other countries close their borders. About 2,000 people a day are continuing to risk their lives and money to travel by boat to Greece.

As Taoiseach Enda Kenny put it in Brussels on Monday, the EU has been forced for the first time in its history to make special humanitarian aid available for refugees within its own borders through a new €700 million, three-year humanitarian programme.

The need for a solution is critical. Whether the provisional deal etched on Monday will be the answer is far from clear.

Within hours of its announcement in Brussels, the United Nations and human rights agencies denounced the deal. Médecins san Frontières, which has been filling the gap left by national authorities by providing humanitarian assistance to desperate migrants, described the proposal as “cynical”, criticising in particular the “crude calculation” that would see one refugee resettled for every one sent back to Turkey. Amnesty believes the accord is “wrought with moral and legal flaws”.

More worryingly, the UN’s refugee agency said that any blanket deportation of people would be incompatible with international and EU law.

Whether the agreement put forward on Monday night becomes a reality remains uncertain. Much depends on ongoing negotiations ahead of next week’s summit.

The European Commission and European Council, well aware of the legal pitfalls, will be working to ensure any agreement put forward next week is legally sound. Central to the success of the deal will be the status of readmission agreements – the legal texts that permit the return of third-country nationals to their country of origin.

Separately, the European Commission has pledged to advance an EU-Turkey readmission agreement, which will address the crucial question of whether Turkey is considered a “safe country” by the EU. The commission is hoping to bring forward the measure by June. It is then probable the controversial “one for one’” resettlement plan would operate under the bilateral agreement before the EU-Turkey readmission agreement comes into force.

The pledge to bring forward visa liberalisation for Turkish nationals visiting Schengen countries will also face opposition. A number of member states, including France, are lukewarm towards the concept, with France insisting the previously agreed conditions are met by Turkey.

Resistance is also evident in Germany, with some senior members of chancellor Angela Merkel’s conservative party insisting yesterday visa-free travel between the EU and Turkey should be agreed only if Turkey is given “country of safe origin” status.

As well as the legal difficulties facing the plan, huge practical questions remain. This includes the question of where Turkey will house the refugees it accepts back from Greece as it begins the process of identifying those entitled to claim asylum and those bound for resettlement.

Similar logistical challenges exist for Greece , which will be tasked with sending back refugees to Turkey despite its inability to cope with the “hotspot” system supposed to be the first port of call for arriving migrants.

Given the enormous moral, legal and practical challenges of the resettlement plan, some compromise is almost inevitable over the next week as the EU races to come forward with a decisive response to the crisis. The outcome could yet be the worst of both worlds – a half-baked deal that turns a blind eye to Turkey’s democratic failings without resolving the refugee crisis. For the thousands seeking refuge, it may all be too little too late.