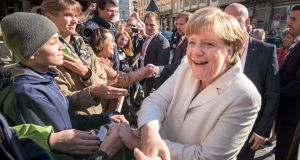 Growing disunity over how to manage the refugee crisis overshadowed weekend celebrations marking a quarter century of German unity.

A month after Germany’s “refugees welcome” images flashed around the world, pressure is growing daily on Chancellor Angela Merkel to pull the emergency brake on inward migration.

Among her loudest critics are state leaders from her own centre-right camp, who warn that their resources are exhausted even before an estimated one million refugees arrive in Germany this year.

Uncertainty over how to cope with the growing immigration wave has triggered a second debate about what comes next: how best to communicate German values and ensure the successful integration of new arrivals.

On Saturday, in an address marking German unification in 1990, President Joachim Gauck said new arrivals needed to understand that the foundation stones of modern German life were not up for discussion, from gender equality and gay rights to the unacceptability of anti-Semitic views.

A quarter century after ex-chancellor Willy Brandt promised that “what belongs together is growing together”, Gauck said Germany now faced a challenge equal to that it faced in unifying two German states.

“As in 1990 a challenge awaits us that will occupy us for generations,” he said at a central ceremony in Frankfurt on Saturday.

“The difference to then now is that, what until now didn’t belong together, should grow together.”

Gauck warned his audience, including Merkel, that German “hearts are open but our means are limited”.

Hours later, Merkel shrugged off domestic critics who trace the current surge back to her instruction to asylum authorities a month ago to suspend Dublin asylum regulations for Syrians, allowing them to register in Germany rather than their point of entry to the EU.

Until then Germany had to manage the challenge to the best of its ability, she said, dismissing talk from her conservative camp for fences on German borders and tighter asylum laws.

“Nobody leaves their homeland lightly,” she said.

“We have to see that those who need protection get it . . . while those who don’t necessarily need it, for instance who come to us for economic reasons, leave our country again.”

Growing frustrations and rising fears over the refugee crisis are beginning to make themselves felt amid daily reports of attacks on asylum accommodation and fights among refugees.

Amid the intensifying crisis, Merkel’s popularity is at a four-year low in opinion polls, though her CDU party remains stable.

Bavarian state premier Horst Seehofer has described the chancellor’s response to the refugee crisis as a “historical mistake” and warned at the weekend: “If immigration is not limited in the coming weeks we will have a collapse with forewarning.”

After weeks as a lone critic, Seehofer has seen his pessimism begin to spread throughout the political spectrum.

Finance minister Wolfgang Schäuble agreed with Merkel that the only realistic solution to the refugee crisis was a European agreement. But on television last night he added: “We cannot afford the impossible; our means are limited.”

That critical tone can be heard in all federal states and in all political parties.

But German refugee groups have criticised the increasingly polarised debate, warning politicians not to oversimplify the challenges or to transfer onto refugees problems caused by administrative failings.

In Berlin, the city-state refugee registration centre has been swamped for weeks, with refugees sleeping in a park outside for more than three weeks to file an asylum application.

German politicians have, in recent days, shifted their attention to integrating asylum seekers into German culture, triggering a new round of how to define exactly what is German culture.

“For many refugees our culture will, of course, be alien,” said Sigmar Gabriel, federal economics minister and leader of the Social Democratic Party. “What we need is not just language translators but cultural translators.”