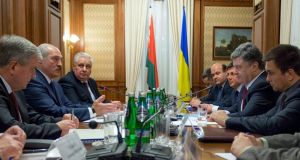 International talks on Ukraine’s conflict appear to be in limbo after a planned meeting failed to take place, with Russian-backed separatist rebels accusing Kiev’s pro-western government of “sabotaging” the halting peace process.

Ukraine’s president Petro Poroshenko said last week he hoped talks would resume yesterday in Minsk between representatives of Kiev, Russia, the militants and the Organisation for Security and Co-operation in Europe.

A preparatory video conference was held on Friday, but the insurgents running parts of Donetsk and Luhansk regions said they could not meet earlier than today, and then announced that no date for face-to-face talks had been agreed.

Denis Pushilin, a rebel negotiator, said the parties to the negotiations had failed to agree an agenda for a Minsk meeting during the video conference. He said the militants wanted to discuss “withdrawing heavy equipment, an armistice, prisoner exchange, the removal of economic blockades, and the special status” of rebel-held areas.

Mr Pushilin said the separatists would “insist on expanding the borders” of their self-declared republic to “the borders of Donetsk region. We want to achieve that peacefully, by political means”.

Kiev could not agree to such a proposal, however.

Ukrainian forces now control much of Donetsk and Luhansk provinces after pushing back the rebels during a summer offensive, which ended when Russia allegedly deployed significant numbers of troops to support the militants.

That Russian-backed rebel counter-attack prompted Kiev to agree to peace talks in early September in Minsk, Belarus, where a ceasefire and a broad framework for a peace settlement were agreed.

The pact failed to halt the bloodshed, however, and more than 1,000 people have been killed since it was agreed. According to the United Nations, more than 4,600 people have died in fighting since April, and about one million have been displaced.

Mr Pushilin said the rebels were ready to resume talks at any time and hoped all sides would meet in the Minsk format again before the end of the year.

Ukrainian officials have not explained the latest delay in negotiations, but Mr Poroshenko met Belarusian leader Alexander Lukashenko in Kiev yesterday and is due to meet Kazakh president Nursultan Nazarbayev today. Both are seen as Russian allies who may be seeking to broker a deal between Kiev and Moscow.

“The Ukrainian side is sabotaging the Minsk talks,” said Donetsk rebel leader Alexander Zakharchenko. “Everyone says they want them to happen, but no one can say when.”