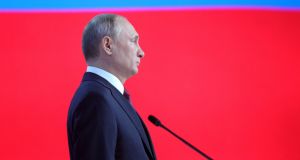 Vladimir Putin moved to shore up flagging domestic support on Wednesday, calling for an increase in government spending to fund national modernisation and help millions of Russians escape the poverty trap.

In his televised annual state-of-the-nation speech, the Russian president pledged to deliver an improvement in living standards within the year, saying the government had accumulated huge financial resources to fund development of a prospering, socially inclusive nation.

“We are building a model of social and economic development that will allow and guarantee the best conditions for people’s self-realisation, and provide a worthy response to the problems of the fast changing world,” he said.

Russia could only achieve its goals by “joining forces, consolidating society and preparing . . . all citizens of Russia to achieve success”, he said.

Mr Putin has seen a sharp drop in his approval ratings since winning a fourth presidential term with a record-breaking majority last March. Government plans to hike the retirement age and raise taxes announced after his re-election sparked nationwide protests, with many Russians complaining that Mr Putin had forgotten about the cares of ordinary people.

Pension reforms have stoked public resentment about falling real incomes and the yawning gap between rich and poor. Even official statistics acknowledge that some 19.3 million people are now living below the poverty line – more than 13 per cent of the population.

“This is too much,” Mr Putin told 1,500 members of the Russian elite who gathered in a cavernous exhibition hall near the Kremlin to hear the president’s address. “Serious problems beset many people, they have to economise on clothes, medicine and even on food.”

Mr Putin devoted most of his speech to fleshing out details of a dozen “national priority projects” unveiled last May that will see investment of some 25.7 trillion rubles (€345 billion) in the modernisation of healthcare, education, housing, infrastructure and agriculture by 2024.

Years of tight monetary policies had paid off, allowing Russia to reduce foreign debt and accumulate a large cushion of financial resources, some of which could now be released to fund national development, he said.

Measures to halt a population decline – caused by a drop in the birth rate as Russia lurched chaotically from communism to capitalism in the 1990s – would top the agenda in welfare programmes aimed at combatting poverty. Mr Putin promised more generous child benefits and tax and mortgage relief for parents raising more than two children.

Increased government spending on health and education would focus on remote regions in the Russian countryside that have seen little benefit from the oil-driven economic boom in the first decade of the noughties that brought prosperity to many large cities.

About 200,000 children were studying in village schools without heating, water supply or drains, Mr Putin acknowledged. “If parents see that their children are studying in such conditions all talk about justice and equal opportunities for these people only irritates them.”

Massive infrastructure projects would also address imbalances in regional development and boost development of Russia’s backward far east, Mr Putin said. Some 60 airports would be renovated over the coming six years and capacity doubled on the Trans Siberian Railway.

Addressing pressing ecological problems, Mr Putin offered some relief for Russians protesting about the hazardous build-up of rubbish at dumps in the periphery of major cities that have been causing health problems for local residents. At least 30 problem dumps would be closed down and a system of waste management and recycling introduced, he said. It was “absolutely inadmissible” for the authorities to “wave aside citizens’ demands” and give the impression that nothing was happening”.

Turning to foreign affairs towards the end of his speech, Mr Putin said he hoped that the EU would move to restore political and economic relations with Russia and allow business between the two countries to flourish.

He castigated the US for pulling out of a Soviet-era arms reduction treaty on “dreamed-up” charges that Russia had violated terms of the agreement. Russia was pressing ahead with development of a new generation of nuclear weapons to protect national security and, while ready to resume disarmament talks with the US, “would no longer knock on closed doors” in Washington, he said.