Daniel McLaughlin on the Vrsic Pass 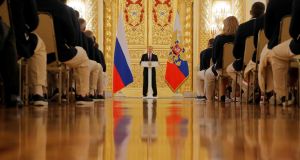 Slovenia’s Vrsic Pass is a tranquil place, thick with wildflowers and pines, but one glade rang this week to the sound of brisk labour.

At a height of 1,200 metres, beside a historic road that twists beneath the pale peaks of the Julian Alps, the 100-year-old “Russian Chapel” was being made ready for a controversial visitor.

As workers erected covered platforms to protect VIPs from the changeable weather, down the valley at Ljubljana airport a big Ilyushin jet delivered people who would make other, less visible preparations for the arrival of Russian president Vladimir Putin.

With his Slovenian counterpart Borut Pahor, Putin will reach the chapel via a road built in 1915 by Russian prisoners of war, whose Austro-Hungarian captors needed a new supply route to the Isonzo Front in order to combat Italian forces.

In March 1916, just months after the “Russian Road” was completed, an avalanche swept down the mountainside, killing between 100 and 300 Russian POWs and up to 80 Austro-Hungarian guards.

The surviving Russian prisoners built the St Vladimir chapel that same year and erected a headstone dedicated to the “Sons of Russia” who were buried nearby.

Slovenian officials want to play down the political significance of Putin’s visit, but ties between Russia and the West have now become so strained that his arrival in an EU or Nato state intrigues many and alarms some.

His half-day in Slovenia comes amid Moscow’s alleged meddling in the US presidential election in favour of Donald Trump and lingering discord with the West over everything from doping in sport to continued conflict in Syria and Ukraine.

Putin is also seen as a key beneficiary of Brexit, which is expected to weaken fraying EU resolve to maintain sanctions against Russia for annexing Crimea from Ukraine and fomenting a separatist insurgency in the east of the country.

Many senior EU officials now believe Moscow is using everything from energy supplies to propaganda to funding for extreme Eurosceptic parties to turn cracks in the crisis-ridden bloc into potentially unbridgeable chasms.

The Kremlin said only that Putin and Pahor would discuss “co-operation issues in trade and the economy, investment, and the cultural and humanitarian fields. An exchange of views on current international and regional issues will also take place.”

Slovenian foreign minister Karl Erjavec insisted Putin’s visit to the country – which is on the planned route of a currently frozen Russian gas pipeline project – was not a sign of Ljubljana breaking ranks with the West over Russia.

“President Pahor discussed with the leaders of the EU and Nato members about the intended invitation . . . before he actually extended it,” Erjavec told The Irish Times.

“On many occasions I explained to my colleagues in the EU and Nato the commemorative nature of the event.

“Slovenia stands for dialogue and peaceful resolution of all outstanding issues and disputes. I consider the ceremony on the occasion of the Russian Chapel centenary to be not only a tribute to the victims of the nations of the then tsarist Russia, but something much greater: I see it as a message of peace.”

In visiting the chapel and unveiling a new memorial in Ljubljana to Soviet troops killed during the second World War, Putin will again portray his country as both hero and victim, whose glory and pain the West belittles. At the same time, he is likely to call on the West to unite with Moscow against terrorism, while seeking to relegate Ukraine’s conflict to the status of a minor local difficulty.

Russian nationalist bikers the Night Wolves – with whom Putin has ridden and whom some EU states have banned – visited Ljubljana this month on a campaign for “Slavic unity”, highlighting what critics call the Kremlin’s clear propaganda aims.

But Mykhailo Brodovych, Ukraine’s ambassador to Slovenia, said: “The man who is responsible for the death of 10,000 of my compatriots during the last 2½ years comes to honour the memory of a bit more than 100 prisoners of war . . . of different nationalities, not only the Russians.”

Today, Brodovych said, Slovenia would see “another Russian attempt to privatise the memory about the perished prisoners of war and to make them a part of the so-called ‘Russian world’”.