Provins quick to embrace first step on road back to normality 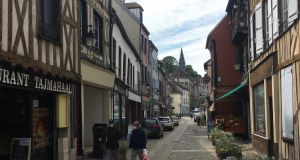 Locals shopping on the tiny cobbled main street in the medieval city of Provins in France. The town is less than 100 kilometres from Paris and expects more visitors as France loosens restrictions imposed during the Covid-19 lockdown. Photograph: Tala Skari

Located 96km southeast of Paris, Provins is at the outer limit of the capital’s 100km “perimeter of liberty”, as established by the French government when it partially lifted the coronavirus lockdown on May 11th.

If it weren’t for the large number of people wearing surgical masks, and flacons of hand sanitiser in every shop, you could almost forget the pandemic.

Cars clog streets lined with bulging, leaning, half-timbered houses, many of them dating from the 12th century. Shops on the main street offer a large selection of food, clothing, shoes, books. True to its origin as a medieval centre of commerce, Provins, population 12,000, is bustling.

There’s a queue outside the Ink Redemption tattoo and piercing parlour. Mickael Gandilliet, a 28-year-old body piercer with a Mohawk haircut, mans the cash register, behind a sheet of plexiglass.

The salon reopened a day earlier, and is fully booked for days.

“People have been locked up for two months. They want to make themselves happy,” Gandilliet explains.

Tattoo artist Stéphane Civade has just received his first order inspired by the pandemic, a request for La Santa Muerte, the Mexican folklore character signifying death, with a scarf across her lower face. “It’s only a matter of time until someone asks for a sphere with spikes, like the coronavirus,” he predicts.

Mayor Olivier Lavenka refuses to provide statistics for the number of patients or fatalities, though he says Provins has been “relatively spared”. In late April, Lavenka announced that 40 residents of the Rosa Gallica nursing home had contracted the virus, and 17 had recovered, out of 150. No figures have been released since.

“I have clients who work in the hospital,” Civade says. “It’s worse than what they’re telling us. I’m not saying they’re lying, but they’re not telling us everything.”

At the town hall, Lavenka admits there have been deaths in Provins, but will not say how many. “If I knew I would not tell you,” he says.

Lavenka was parliamentary assistant to Christian Jacob, the leader of the conservative opposition party Les Républicains and former mayor of Provins. Lavenka took over because French politicians are no longer allowed to accumulate elected positions. Jacob was diagnosed with Covid-19 in mid-March and spent two weeks in isolation at his home in the centre of town.

“Provins is a secretive town,” says a well-informed observer. “It’s been run by the same team since 1995, and the system is deeply entrenched.”

Another former mayor, Alain Peyrefitte, the Gaullist statesman who died in 1999, is revered here. Peyrefitte published When China Awakens in 1973. His photograph, shot in a Chinese classroom, hangs outside Lavenka’s office.

Lavenka has visited Pingyao, southeast of Beijing and twinned with Provins, three times.

He doubts current tensions between France and China will affect this.

Provins is a Unesco world heritage site “because our town played an important part in the flowering of western civilisation, which was based on the association between towns and commerce,” Lavenka says.

“It was the capital of the counts of Champagne. From the 12th until the 14th century, it was the third largest town in France, after Paris and Rouen. Traders converged from Bruges to the north and Italy to the south, several times a year.”

The well-preserved medieval gem attracts 1.2 million tourists a year, one quarter of them foreign. April, May and June are the busiest months. Saving Provins’s tourism industry is his top priority at the moment, Lavenka says.

Bed-and-breakfasts have been allowed to remain open, and are booked solid for the May 21st and June 1st bank holidays. But hotels, cafes and restaurants in the “red zone” – the north eastern part of France where Provins is located – remain closed until further notice.

Exploring the 100km perimeter, one sometimes has the impression that hordes of Parisian invaders are feared more than coronavirus.

Provins’s accessibility to Parisians is a mixed blessing, Lavenka admits.

“I’m thinking a lot about how to keep order during the May holiday weekends. If thousands of Parisians show up, where will they stay? What will they eat? What will they do? The monuments, museums and public gardens are still closed.”

Because of continuing restrictions, it can be a challenge just to find a toilet.

Véronique Dessery, my landlady at the Demeure des Vieux Bains bed-and-breakfast, regales me with descriptions of her medieval costumes. She used the lockdown to repaint doors, windows and garden furniture, and repair the 12th century tile floor of her breakfast room.

Dessery expects €60,000 in losses for the March to May period, and had to reimburse reservations for the cancelled medieval festival in June. For her, Parisians on a 100km tether are a godsend.

We're a lot less stressed here than people in Paris

Provins never shut down to the extent that most of France did. The Canova bookshop operated “en drive”, the French expression for a take-out business. Les Bistrophiles is a restaurant selling food with local ingredients such as Damascene roses brought back by crusaders, lentils and saffron. Owner David Romaska gardened and fished for the first month, then opened a lunchtime takeaway in mid-April. He hopes to make up to one fifth of his usual revenue this month.

When restaurants are eventually allowed to serve sitting guests again, Romaska fears he’ll be asked to remove half his 56 tables, to enable social distancing.

“You have to go with the flow,” says Romaska.

Like all French entrepreneurs, he has been somewhat sheltered from the brunt of the pandemic. Every business receives €1,500 monthly. More than 12 million newly unemployed French, including one of Romaska’s employees, receive 80 per cent of normal salaries from the state.

“We’re a lot less stressed here than people in Paris,” Romaska says. “The people who’re complaining are the ones who always complain anyway.”