Matarella is a seasoned politician, a staunch constitutionalist and the first Sicilian to hold office 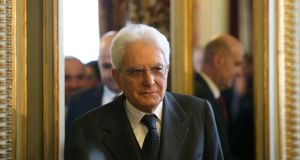 For Sergio Matarella, the man elected today as Italy’s 12th president, all changed on the morning of January 6th, 1980. That was the day when a Cosa Nostra hitman killed his brother Piersanti, then governor of Sicily and a fearless opponent of the Sicilian mafia.

Piersanti Matarella, his wife and three children were in the family car, just outside their home in central Palermo and on their way to mass for the Epiphany. The killer, who has never been identified, fired eight bullets into the car, killing Matarella and injuring his wife.

The first person on the scene was his younger brother, Sergio. Together with his brother’s wife, Irma Chiazzese, he struggled to pull his bloodied brother out of the car. Piersanti Matarella died in his brother’s arms shortly afterwards in the ambulance on the way to hospital. For the rest of that day, the grieving Sergio received the condolences of friends and colleagues in the hospital, still wearing a sweater smeared with his late brother’s blood.

That traumatic event inevitably changed Sergio Matarella’s life, propelling him three years later into a 25-year long political career, first in the ranks of the Christian Democrats and then later of the Democratic Party (PD). To some extent, this was only natural for a member of a family that some have called the “Sicilian Kennedys”, given the political activity of not only his brother Piersanti but also his father Bernardo, who had been a government minister.

Elegant, reserved and understated, 73-year-old Sergio Matarella played a downstage role in his political career, even as he served as deputy prime minister, minister for defence and minister for education in governments led by Giulio Andreotti and Massimo D’Alema.

However, back in 1990 he prompted huge controversy by resigning as minister for education in protest against the so-called Mammi Broadcasting Law, legislation which de facto paved the way for the growth of the commercial TV empire of media tycoon and current centre-right leader, Silvio Berlusconi.

President Matarella is also known for giving his name to the 1993 electoral law, known as the “Matarellum”. A constitutionalist, he drafted the 75 per cent first-past-the-post, 25 per cent proportional representation law which many consider much superior to the Berlusconi-imposed “Porcellum” which replaced it 12 years later.

It is often said that an Italian president needs to have at least four important qualities - a deep knowledge of the national political scene, an intimate understanding of the constitution, international standing, and an empathy with public opinion. In Sergio Matarella’s case, he ticks the first two boxes more than adequately.

Where he falls down is on the international front, since few observers outside of Italy know him. However, the outgoing president Giorgio Napolitano, who is believed to have warmly supported the Matarella cause, argues that both international visibility and public empathy develop with the job.

What seems certain is that the election of Sergio Matarella represents yet another feather in the cap of youthful prime minister Matteo Renzi. Faced with a complex election which could have led to either an internal PD schism or even a government collapse, he promoted a candidate who has won broad support in parliament, picking up 665 votes well clear of the 505 majority required in this fourth vote.

Given Sergio Matarella’s curriculum, there is every reason to believe that he will prove to be a strong president, one who is well capable of safeguarding the Italian constitution, which is arguably the Italian president’s most important role. It is very hard to imagine Mr Matarella signing any legislation which might in any way favour specific lobby interests, especially those of organised crime.

Last but not least, this is a historic moment for Sicily, since Sergio Matarella is the first Sicilian to serve as president.