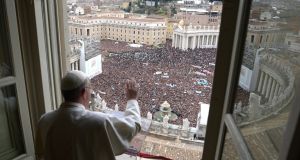 Newly elected Pope Francis appears at the window of his future private apartment to bless the faithful, gathered below in St Peter's Square. Photograph: Osservatore Romano/Reuters

More than 100,000 people gathered to hear Pope Francis say his first Angelus from the papal apartments at the Vatican this afternoon

In a scene more akin to a South American soccer stadium than the usual St Peter’s square, flags and banners from most Latin American countries were evident, but particularly from Argentina.

Before reciting the prayer, he told the story of meeting an elderly lady who said to him “The Lord forgives everything”. He asked her how she knew this and she replied: “If the Lord hadn’t forgiven all, then the world wouldn’t (still) be here.” to which he responded “madam, did you study at the Gregorian (the oldest Jesuit university in Rome and the world)?, because that is wisdom, which the Holy Spirit gives – interior wisdom regarding the mercy of God.”

Earlier this morning, he celebrated Mass at St Anne’s, parish church of Vatican city. In his homily, he warned against passing judgent on people. “if we are like the Pharisee before the altar, (who said) ‘Thank you, Lord, for not making me like all the other men, and especially not like that fellow at the door, like that publican…,’ well, then we do not know the heart of the Lord, and we shall not ever have the joy of feeling this mercy.”

After the Mass, he shook hands with people gathered outside.

Where the Roman curia are concerned, Pope Francis has asked that they remain in place for now to allow him time “for reflection, prayer, and dialogue before any final appointment or confirmation is made”, according to a Vatican statement.

Tomorrow he will be visited at the Vatican by the president of Argentina Cristina Fernández de Kirchne. Next Saturday, he will meet his predecessor meet Pope emeritus Benedict XVI at Castel Gandolfo.