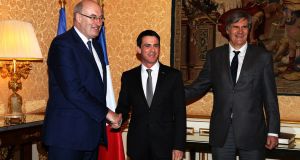 France is the only country that Phil Hogan, the EU commissioner for agriculture, is visiting in the run-up to the March 14th council of agriculture ministers. That’s because the farming crisis is most acute there.

Mr Hogan had asked all 28 EU members to submit proposals for alleviating the crisis in dairy and pig farming by Thursday. He held a blue file containing the French proposals.

“The commission is determined to find solutions commensurate to the seriousness of the current difficulties, and will respond formally at the council,” he said.

Mr Valls said his government had done everything it could to help French farmers, including reducing social insurance charges by 10 per cent. Now it was up to the commission.

“The commission must fully assume all its responsibilities,” Mr Valls said. “It must use its power of initiative, make strong announcements, take decisions, not waste time.”

The prime minister then made what sounded like a threat: “Failing that, the bond of confidence that exists between France and the EU is in danger of cracking.”

“The French policy position in relation to supply management and quotas is well known,” Mr Hogan said. “Those proposals were put forward in 2013 and the council did not feel they could agree to [them] at the time. You can take it that these proposals are emerging again from the French government. We will see what the attitude of the council is in 2016, three years later.”

Mr Hogan referred to the “traditional structures” of French agriculture and the need for “greater generational renewal” in the sector.

He bridled when a French journalist asked him if the EU had become too liberal.

“We have a global oversupply for the last year and on top of that a Russian embargo, which coming together is a perfect storm for European producers,” Mr Hogan replied.

He was also defensive when another journalist said the French felt Europe was not protecting farmers.

“The highest recipient of money in the European Union is French agriculture – €11 billion a year, an average of €30,000 per farmer,” Mr Hogan said.

“The British farming community in particular recognise the importance of staying in a union that gives them a safety net in terms of income,” he said, “but also provides many trading opportunities they would not have otherwise.”