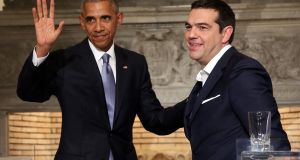 US president Barack Obama has used an official visit to Athens to reiterate his support for debt relief for Greece – delivering a message that its premier, Alexis Tsipras, desperately hopes will be heeded in Berlin and other EU capitals ahead of a crucial Eurogroup meeting early next month.

Speaking on the first leg of his final presidential overseas trip, before travelling on to Berlin, Mr Obama said “in my message to the rest of Europe, I will continue to emphasise my view that austerity alone cannot deliver prosperity”.

Referring to the rise of populism on the right and left in Europe and the US, Mr Obama repeatedly underlined the need to offer people hope.

“You cannot simply work austerity as a strategy and it is incredibly important that the Greek people see improvements in their daily lives,” he said.

Mr Obama said the election of Donald Trump to succeed him as US president, and the British vote to leave the European Union, reflected the need to deal with “people’s fears that their children won’t do as well as they have”.

“Sometimes people just feel as if we want to try something and see if we can shake things up,” he said, adding pointedly that some of the rhetoric in the US elections was “pretty troubling and not necessarily connected to the facts”.

In comments enthusiastically received by Mr Tsipras, the US president pledged to continue to urge creditors to take the steps needed to put Greece on a path towards a durable economic recovery.

He added that the world was indebted to the Greek people – especially those living on its islands – who had shown compassion to refugees fleeing war.

Greece was also one of five Nato countries that repeatedly committed two per cent of its GDP to supporting the alliance, he pointed out.

Although many argue it may have come too late, Mr Obama’s support is a welcome boost for the Greek prime minister whose party Syriza, according to successive opinion polls, has fallen far behind the main conservative opposition party New Democracy in recent months as his government has introduced further austerity measures in order to release another tranche of loans under its third memorandum agreement.

Expressing his firm belief that Mr Obama’s message on debt relief would be heeded, the Greek leader said be believed the German chancellor would show the same leadership in the economic crisis as she had done in the refugee crisis.

“I’m very optimistic about the debt because Angela Merkel is a politician with a deep sense of responsibility towards Europe, and not just to her own country and party,” he said.

“So, I believe she will be convinced that such [debt relief] measures – which do not constitute a burden for the German taxpayer – should be taken so that Greece is not the problem in Europe, but part of the solution.”

As the trip was announced before Donald Trump’s unanticipated victory in the US presidential election, there are questions over whether Mr Obama has any leverage left to persuade Berlin on the need for debt relief for Greece.

But placing Greece in the broader regional picture may have been the incumbent president’s most important contribution.

“Obviously, there are questions about what direction the White House will go in, from now on, in terms of economic policy and its diplomatic approach. The fact that Trump won and there is instability in the broader region around Greece strengthens the argument that Obama is making in terms of linking debt relief with Greece’s geopolitical position,” said Nick Malkoutzis, editor of political analysis website Macropolis.gr.

“The way the political situation within Europe and in the US has evolved, there might be a few more people willing to listen to Obama’s arguments about Greece as a partner. That’s the biggest bonus from the Greek point of view.”

The US presidential visit was accompanied by a massive security operation that involved a ban on all demonstrations in a large area of central Athens, as well as the deployment of thousands of Greek police and a few hundred US secret service agents.

When in opposition, Mr Tsipras’s Syriza party described similar lockdowns for other leaders, such as Ms Merkel, as “trampling on citizen’s rights and diminishing democracy”.

On the streets, the presidential visit generated little enthusiasm.

“The visit has brought chaos. We can’t get around; we can’t go to work. Is that freedom? The visit has made this into a dead city, that’s all it has achieved,” said Sofia Papageorgiou, 28, outside a shuttered metro station as she figured a way to get to her workplace despite the security measures and an unrelated work stoppage by transport workers. “Nobody can help us. It’s all a joke.”

Dozens of left-wing parties and groups vowed to defy the protest ban.

As the US and Greek leaders sat down for a state dinner, there were violent clashes around the city as police used tear gas and protesters threw petrol bombs.