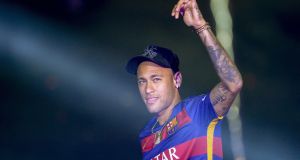 Spanish prosecutors have called for Brazilian soccer player Neymar to stand trial for fraud because of alleged irregularities involving his transfer to Barcelona three years ago.

Neymar and his father, who is also his agent, are alleged to have committed fraud by trying to hide the real amount of his transfer in order to pay a lower commission to the investment group that owned part of his rights at the time, prosecutors said on Tuesday.

A judge will analyse the prosecutors’ demand and decide whether to install a trial. Neymar and his father could face a prison sentence of up to two years if found guilty.

The two maintained their innocence when they appeared before a judge in Madrid in February.

They have denied any wrongdoing.

The accusations came a few days after Lionel Messi went on trial for tax fraud in Barcelona, where he and his father were accused of defrauding Spain’s tax authority of €4.1 million from 2007-09.

A ruling is expected in the coming weeks.

Also this year, Barcelona defender Javier Mascherano was handed a suspended one-year prison sentence for not paying almost €1.5 million in taxes for 2011-12.

Brazilian investment group DIS claims it was financially damaged because Barcelona and Neymar allegedly withheld the real amount of the player’s transfer fee to Barcelona from Santos in 2013.

DIS claims it received a smaller compensation than it was entitled to as a result.

Santos officially received €17.1 million for Neymar’s transfer to Barcelona, but prosecutors said the total amount paid by the Spanish club was €25.1 million, meaning DIS would be entitled to an additional €3.2 million.

Prosecutors said the difference comes from payments made by Barcelona to Santos for the future acquisitions of other players, as well as partnerships for friendly matches between the clubs.

According to court documents, DIS paid about €1.3 million for 40 per cent of Neymar’s rights in 2009.

Investigations in Spain have claimed that Barcelona spent more than €80 million to acquire the Brazilian.

Court documents said Neymar’s contract with Santos, which was valid until July 2014, had a buy-out clause of €65 million, but the club authorised Neymar’s father to begin negotiating with other clubs before the contract ended.

They reached a deal with Barcelona, and the club paid €10 million in advance to Neymar’s father in 2011 to guarantee the player’s signing.

1 With Lincoln looking on, the crowd dropped to their knees as 7pm approached
2 Luke ‘Ming’ Flanagan bares his bottom half to European Parliament
3 Coronavirus: 25% of new cases arising in the community with no known link to other cases
4 Easing restrictions: What exactly will happen next Monday?
5 Are we there yet? The seven sticking points in Government formation talks
Real news has value SUBSCRIBE