We are determined to succeed says Samaras, as government gets down to business of the economy 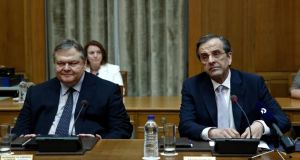 Greece’s prime minister has told the first cabinet meeting of his new, two-party coalition that his country has no time to spare in order to emerge from its economic crisis and that stability within his government is essential.

“Our immediate priority is to return to recovery ahead of time, defeat unemployment, attract investment, avoid new [austerity] measures and provide jobs for the youth,” Antonis Samaras told his old and new ministers, in his customary terse manner.

“We have no choice but to succeed and we are determined to succeed,” he continued, reiterating that it was his intention to complete the remaining three years of his four-year term, a desire many observers believe is farfetched given that his conservative New Democracy/socialist Pasok coalition commands a majority of only three in the 300-seat parliament.

The new cabinet, in which Pasok MPs assumed positions under Mr Samaras for the first time, emerged in a reshuffle necessitated by the withdrawal last week from government of a third coalition partner, Democratic Left, in a dispute over the shutdown of the national broadcaster ERT.

In the previous cabinet, Pasok was represented by two technocrat nominees, one of whom will continue in agriculture.

While Pasok is now represented in most of the ministries, it has no presence in the key portfolios of finance and development.

The new appointees to the 41-member government, comprising 19 cabinet, six alternate and 16 deputy ministers, were sworn in by the Orthodox archbishop of Athens in the presence of the country’s president, Karolos Papoulias.

Ministerial line-up
But in contrast to Mr Samaras’ vows of success, the new ministerial line-up, which includes a half dozen offspring of onetime ministers, six erstwhile journalists and a pair of cousins (each in different parties), has failed to generate much inspiration or optimism.

The appointment to the health portfolio of Adonis Georgiadis, who a decade ago sold conspiracy theory books on a far-right station, is seen as a reward for his relentless and zealous support for Mr Samaras, expressed on a daily basis on television shows and Twitter.

Kyriakos Mitsotakis, the son of a former New Democracy prime minister and old Samaras foe, takes over at the administrative reform ministry, and, as such, will have to fire 4,000 civil servants by the year’s end under a deal with the troika.

“The new government reproduces the problems of the catastrophic governments of the previous decade, where, too often, unqualified people were appointed to ministries in which they had little knowledge,” said the centre-left To Vima, capturing the mood of a large section of the Greek public.