Legendary train said to have left Polish city laden with gold, jewels and stolen art in 1945 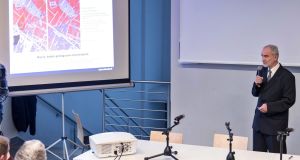 Prof Janusz Madej reports on his team’s findings on the existence of the so-called Nazi gold train at a press conference in Poland. Photograph: Maciej Kulczynski/EPA

Scientists have quashed a claim by two amateur treasure hunters that they had discovered a legendary gold train hidden by the Nazis in a southern Polish railway embankment.

“There is no train,” Prof Janusz Madej of the Polish mining academy told a press conference in the city of Walbrych, attended by dozens of journalists and television crews who began following the gold train story after the treasure hunters made their claim in August.

“The geo-magnetic model anomalies would be far greater if there was a train,” he said.

Madej spoke after a team of scientists spent a month surveying a site at the 35km mark on the Wroclaw-Walbrych railway line identified as the train’s resting place.

After the Polish army cleared the railway embankment, the scientists from the mining academy used magnetic field detectors, thermal imaging cameras and radars to scan the spot where the enthusiasts claimed they had found a train hidden in a tunnel and sealed by exploded rocks.

But the treasure hunters, Piotr Koper and Andreas Richter, attempted to keep speculation alive on Tuesday, telling the press conference they had found further evidence of the train’s existence.

Such has been the interest in the supposed find that journalists from all over the world, as well as amateur treasure hunters armed with metal detectors, have descended on the city in the past few months.

According to persistent local legend, there are up to three Nazi trains buried in or around Walbrych, a mining town in southwestern Poland that was known as Waldenburg by the Germans.

The trains are said to have left the city of Wroclaw between January and May 1945, laden with gold, jewels, weapons and stolen art.

They were supposedly bound for Walbrych, 60km away, where Hitler had established a secret command centre linked by tunnels to the Owl Mountains southeast of the city.

“We believe there is a train,” insisted Koper. “The readings [by the scientists] are different because the methodological approach was not the same as ours.”

Koper, a builder and amateur history buff, said new research carried out by the two had been handed to the city authorities on December 7th in a sealed envelope.

A city official confirmed this would be checked by experts.

Koper said the train was 92m-long and was contained in a tunnel 8m in width and between 5m-6m wide.

Madej said he respected the amateurs’ work and that “all research is credible”, but said that the readings on their instruments may have been affected by the presence of overhead power cables on the railway line, which is still in use.

No evidence of trains being buried in southern Poland exists in surviving documents. However, the legend survives for several reasons.

Hitler’s command centre, known as Riese, did exist in the Owl Mountains, though it is not clear that it was ever used.

Tunnels survive in the region and amateur treasure hunters are still uncovering more of them.

Thousands of prisoners of war died in the excavation work to create the tunnel network.

The mass removal from the area of thousands of ethnic Germans after the second World War - when Poland came under communist control - meant very few people who were living in Walbrych in 1945, and might have been witnesses to the train, saw out the 20th-century in the region.

People in the town say that in the communist era, amateur treasure hunting was banned.

Some of the tunnels in the mountains close to Walbrych were closed military areas until the 1990s.

Koper and Richter, who both live in Walbrych, claim they located the train thanks to information from a resident of the area at the time who contacted them.

The men claim they are not interested in the cargo aboard the train.

However, in August, through a lawyer, they wrote to the Polish government asking for a finder’s fee of 10 per cent of the value of the train and its cargo.