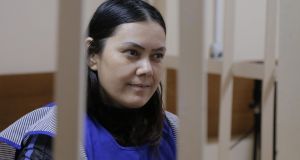 Gyulchehra Bobokulova behind bars during a court hearing at the Presnensky district court in Moscow on Wednesday. Photograph: Maxim Shipenkov/EPA

A nanny accused of decapitating a four-year-old girl and brandishing her head outside a Moscow subway station has been formally charged with murder.

Under Russian law, a conviction carries a maximum sentence of life imprisonment or the death penalty, although Russia placed a moratorium on capital punishment in 1999.

Gulchekhra Bobokulova (38), was detained in Moscow on Monday after she was seen with the child’s head.

Officials have suggested the woman, who was diagnosed with schizophrenia in 2003, could have been incited to kill as an act of terrorism, but Mr Markin said investigation into the motive is continuing.

The woman, who is from Muslim-majority Uzbekistan, said this week the killing was an act of revenge against President Vladimir Putin for Russian air strikes in Syria.

In video posted online on Thursday and circulated by several prominent bloggers, Ms Bobokulova gave her first detailed explanation of an incident that state TV channels chose not to report.

“I took revenge against those who spilled blood,” she told someone asking her questions off camera. “Putin spilled blood, planes carried out bombings. Why are Muslims being killed? They also want to live.”

She also said she had wanted to go to live in Syria but did not have the money to do so.

It was not clear when the video was filmed, but Ms Bobokulova wore the same clothes as when she appeared in court on Wednesday.

A Kremlin spokesman said her remarks should be regarded as those of someone who is mentally unwell. “You need to regard anything that such a deranged woman says accordingly,” Dmitry Peskov, the spokesman, told reporters.