Munich green and glorious as it celebrates St Patrick’s Day

An estimated 30,000 people turned out for a parade and party on Odeonsplatz 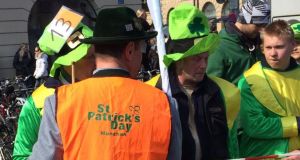 Munich was green and glorious on Sunday afternoon for the 20th annual St Patrick’s Day parade, the largest in continental Europe.

The Bavarian capital showed again why it is also Germany’s Irish capital as an estimated 30,000 people turned out for the parade and party on Odeonsplatz.

There, the tunes came fast and strong - from a full-throated Amhrán na bhFiann to a festive Whiskey in the Jar.

For good measure there was even a communal Our Father.

The music continued at a sold-out Irish cultural evening and continued at Sunday’s parade in beautiful sunshine lead by Munich mayor Dieter Reiter and two Irish guests of honour.

Minister of State Simon Harris said it wasn’t often that Irish politicians were speechless, “but looking out at so many people celebrating Ireland, it is so moving and so emotional for us all”.

The minister put his finger on the special Munich parade atmosphere: for every reveller in an outsize leprechaun hat there were at least three Bavarians who came out to celebrate a culture for which they have huge regard - not a given in these uncertain times. People like Edward Kirsten in full medieval outfit or Gerd Peters, serene with cap and pipe, remembering his year in Gorey in 1993.

Or anthropologist Sandra Meinas, leaving no doubt who she was celebrating with matching Celtic cross chain and ear-rings and a furry triclour bag. “So many Irish people live here in Munich and we Bavarians are always up for a party,” she said.

The parade was a colourful celebration of what locals call the Bayrish feeling - the special connection between to Catholic-reared, beer-drinking, fun-loving peoples.

Where else would you see, in the middle of a parade, a samba-dancing outsized Guinness glass?

“We Irish don’t actually like Guinness,” a straight-faced, thirsty Irish man told two wide-eyed Bavarian ladies, “but on this day they make us drink it.”

That close relationship between the festival and a British-owned brand was even the subject of a questionnaire by Sandra Wagner, an event managment student from Heidelberg.

“I find it interesting how sneakily the company has pushed the Christian tradition into the background to sell their product,” she said. “Now I’m doing a BA to find out why the Irish identity is linked to the marketing of Guinness.” Why indeed?