Migrants fear EU doors will close in wake of attack

Thousands still arriving in EU each day from violence-wracked countries 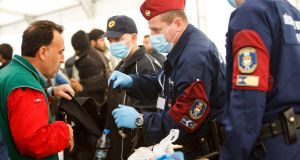 Hungarian special force police officers inspects the rucksack of a migrant as a Slovenian police officer looks on at a registration camp on the Slovenian side of the Croatian-Slovenian border. Photograph: Gyorgy Varga/EPA

Thousands of migrants continue to reach Europe each day, but many fear the Paris attacks have wrecked their hopes of a new life, as states across the continent seek to counter fears that would-be terrorists are arriving as refugees.

Balkan states have confirmed a passport found near the body of one of the Paris attackers was carried by an asylum seeker who crossed the region last month, ramping up security concerns over Europe’s refugee crisis.

It is not clear whether what appears to be a Syrian passport is genuine – the trade in fake travel documents is booming – but Friday’s carnage added grim urgency to the debate over how the EU should handle an expected one million new arrivals this year.

“I think this will be very bad for us. I think we’ll be deported,” said Khodor Singer (25) from Lebanon, at a transit camp in Dobova, Slovenia, yesterday. “Most people think with the mainstream, and look for those who it’s easiest to accuse. People are scared in Europe now, and that’s a big problem for us.”

Singer and his cousin, Mohammed Srougi, left Beirut before at least 44 people were killed last week in a double bombing in the city, for which Islamic State claimed responsibility. “We have had terrible attacks at home too, before Paris. We know what it’s like,” said Srougi (25).

“I hope people in Europe understand that what happened in Paris is not about Muslims or Christians. These people are terrorists – not all Muslims are like that.”

Waiting alongside the Lebanese cousins and dozens of other people in the camp was Mohammed from Somalia, who said he wanted to reach England and then have his wife and seven children join him.

However, the Paris atrocity has dramatically strengthened the case of states that oppose a German-led policy of open borders and distribution of refugees around the EU according to quotas.

“We’ll accept [refugees only] if we have security guarantees. This is a key condition, and today a question mark has been put next to it all around Europe,” said Konrad Szymanski, who became Poland’s European affairs minister in a new right-wing government yesterday.

Slovak prime minister Robert Fico said yesterday close monitoring of Muslim refugees was essential because “virtually every time there has been a terrorist attack, representatives of the Muslims were responsible.”

Even in Germany, the mood seems to be shifting.

“The days of uncontrolled immigration and illegal entry can’t continue just like that,” said Markus Soeder, finance minister of Bavaria, the region through which most asylum seekers arrive in Germany.

“Paris changes everything,” he added.

“This is why we left our home, because of these killers,” said Farid from Deir-al-Zor, referring to Islamic State by an alternative name of Daesh. “Now in Europe too, it destroys,” he added. “But Europe is strong – it must kill Daesh.”