Independent TD asks: ‘When is France going to stop its role in militarisation of the planet?’ 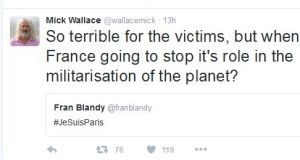 A screengrab showing a tweet from Independent TD Mick Wallace which has promted an angry reaction on social media.

Independent TD Mick Wallace has insisted he does not regret sending a controversial tweet about the Paris attacks.

Mr Wallace has been criticised heavily for posting a tweet late on Friday night questioning France’s role in the “militarisation of the planet”.

The tweet which read: “So terrible for the victims, but when is France going to stop its role in the militarisation of the planet?” was posted just a short time after news of the attacks emerged.

Speaking on RTÉ radio on Saturday, the Independent TD said he did not regret the statement.

He said: “I don’t say things lightly. I feel very strongly about it. As the Pope just said, this is completely unjustifable.

So terrible for the victims, but when is France going to stop it's role in the militarisation of the planet? https://t.co/jjymbD2w0k

“It was an inhumane attack, it is just shocking. It is too bad for words.

“Under no circumstances do I condone the activities or the acts of Isis, and it is just horrific.

“It hardly bears thinking about what happened in Paris last night. All the people that died are so innocent of everything that is going on.”

Mr Wallace’s tweet was met with an angry reaction from social media users and political opponents.

‘Inappropriate and off the mark’

Fine Gael’s Brian Hayes described the comments as “inappropriate and off the mark”.

Independent TD Clare Daly, a political ally of Mr Wallace, also met with a barrage of criticism when she quoted the Wexford TD’s tweet in a later post: “Tragedy behind belief… everyone’s thoughts with victims but it’s always the right time to ask why or it will go on.”

Asked about the comments by the TDs on Twitter, Tánaiste Joan Burton said it was not appropriate to have “backhanded ways of defending terrorism”.

Ms Burton added: “I understand at this point that some people who are claiming this are associating this with Islam. That is entirely inappropriate. Islam is a religion of peace.

“As I said in terms of Europe, we are a union of democratic nations and of democracies. I don’t find any justification for terrorism acceptable.”