Merkel may be planning exit strategy as she turns 60

Does she want to break Kohl’s 18-year record or will she go before being pushed?

Angela Merkel was serenaded with a rendition of 'Happy Birthday' by a journalist at a summit meeting of the European Council in Brussels, to mark her 60th birthday. Video: Reuters 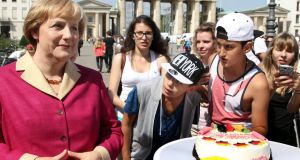 A decade ago, when Angela Merkel turned 50, the birthday girl’s party guests were treated to a surprise. Not a singer or, heaven forbid, a stripper, but a science lecture.

Prof Wolf Singer, one of Germany’s leading brain researchers, explained to puzzled guests how the world was now so complex that it was impossible to predict future developments.

Rather than make radical interventions in social or economic systems, he argued, politicians should proceed in small, sensible steps.

Few guests realised at the time the significance of what they were hearing. Some were desperate for the canapés, others were distracted by the first public appearance of Free Democrat (FDP) leader Guido Westerwelle’s boyfriend.

In the front row, however, the birthday girl listened intently to a blueprint of what would become the “Merkel method” of leadership.

A year later the Christian Democrat (CDU) leader became Germany’s first woman chancellor and, nine years on, has no serious rivals at home or around Europe. Given the prescience of Singer’s lecture in 2004, guests will listen closely to this evening’s 60th birthday lecturer: Jürgen Osterhammel.

If Singer provided Merkel with her method, Osterhammel – a specialist on the 19th-century history and 21st century globalisation – is an expert on her major political theme: how to future-proof Europe for the globalised age.

This is the framework for her controversial “alternativlos” – without alternative – austerity-first approach. Other European leaders complain that her plan to save Europe’s future shows little practical understanding for the real costs in Europe’s present.

The German leader has contributed to a sullen standoff in the euro zone between crisis countries who feel dictated to by the Germans and Germans who feel at the mercy by spendthrift neighbours. And so the new European term will be a delicate balancing act for Merkel between competing demands for reform and stimulus.

Aware of her power, her polarising politics and Germany’s history, Merkel has always understood that modesty is the best policy. They may complain about her politics, but EU leaders who work with her like her professionalism and readiness to listen to opposing arguments.

It is a long way from her carefully crafted dour public image: hairstyles and outfits that place practical and comfort above stylish.

“She will never appear in public looking better dressed than the wife of a regional savings bank manager,” notes one long-term Berlin official.

Her sober image does not mean she can’t loosen up when necessary – see the recent World Cup selfies with the national team – to maximise her appeal with German voters. One in four here would like to her to be at the helm in a decade’s time – but will she?

One school of thought in Berlin suggests she is tickled by the idea of beating Helmut Kohl’s 18-year record to become Germany’s longest serving leader in 2020.

Two jobs are mentioned as being of interest: secretary general of the United Nations, a position free from January 2017, or the third permanent president of the European Council, after Herman Van Rompuy’s successor stands down in five years.

The trouble is that Merkellian politics is an abstract process that eschews personalised projects or traditional political logic or road maps.

“If someone has no goal, the path is, logically enough, endless,” noted Der Spiegel this week. “One has to end the path oneself, for some reason, even if it is only to prevent someone else doing it.”

The first six months of her third term have been smooth sailing, but with the first talk of Merkel successors doing the rounds in Berlin, the German leader may have started work on her exit strategy.

This evening’s birthday lecture, entitled The Horizon of History, might provide some clues to Angela Merkel’s next move. Whatever it is, it will be worth watching.