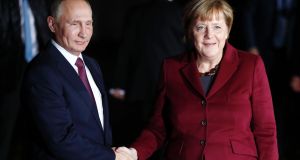 Chancellor Angela Merkel wore a tight smile as she greeted Russian president Vladimir Putin to Berlin on Wednesday ahead of tense talks on the ongoing eastern Ukraine conflict and Russian-backed bombing in Syria.

Mr Putin’s Berlin visit, the first since Russia annexed Crimea in 2014, marked the latest round of high-level talks to broker peace between Ukrainian troops and pro-Russian separatists in eastern Ukraine’s regions.

But looming large over the four-way “Normandy format” talks – including presidents of Ukraine and France – was Moscow’s ongoing support for Syria’s Assad regime and a bombing campaign that has caused brought massive civilian deaths and destruction to the northern city of Aleppo.

Ahead of the first round of Berlin talks on Ukraine, German foreign minister Frank-Walter Steinmeier said “endless patience” was required to achieve “even the smallest step forward”.

He would welcome even “milimetres” of progress on implementing the 2015 Minsk agreement, yet to be adhered to by either conflict party.

While managing down expectations of the talks, German officials were hopeful for at least agreement on greater distances between warring troops, to minimise ongoing casualties in eastern Ukraine, as well as progress on stalled legal agreements to allow regional elections in pro-Russian areas.

As host of the Wednesday evening meeting, Dr Merkel walked a narrow line between challenging and appeasing her Russian visitor.

After the Russian president cancelled a visit to France, and with a short ceasefire holding in Aleppo, Dr Merkel was at pains to engage rather than alienate Mr Putin – closing down the West’s last channel for talks.

However, the German leader insisted that further sanctions against Russia “remain on the table” while her spokesman said Dr Merkel would “name clearly the responsibility” for “wave after wave” of bombings in Aleppo that had created a “catastrophic” situation for the city’s civilian population.

Berlin’s priority was to “stop the madness” of five years of war in Syria, which has killed hundreds of thousands displaced half of Syria’s population, and worry later about attributing war crimes responsibility.

“I see nothing that suggests we are at odds with our partners,” the foreign ministry spokesman added.

But Berlin observers disagreed, warning that Berlin’s low appetite for further sanctions against Russian left it with little leverage as it held a door open for talks with Russia.